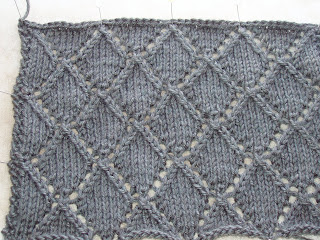 I really like last weeks clue for the Bernat Knit Along. Its a nice diamond or lozenge pattern. I have two of the three colours completed. I took this picture in front of the window and it looks very grey where its really a deep green.

I started work on the alphabet blocks that I showed you last week. My friend, Audrey, was cleaning out for a move and found a set of alphabet blocks that she had embroidered more than 20 years ago. I matched them up with a set of fabric charms representing each letter of the alphabet. I adapted the pattern from a picture in the book 'Sensational Settings: Over 80 Ways to Arrange your Quilt Blocks' by Joan Hanson. My book is the 1993 version, there is a new 2004 edition available. 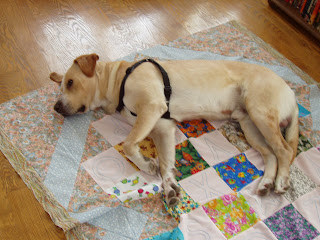 My dog, Atreyu, decided that he wanted to get in the action and take a nap in the middle of my work.

You can't really tell in the final picture, but there is a middle boarder of a marbled fabric. My friend is a paper maker/book binder and it was the perfect fabric to include. Also, I already had it so didn't have to leave the house. The only thing I will need to purchase is a package of Polydown quilt batting. 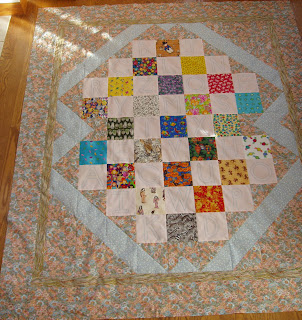 I hope to have this finished by next week so it can go on her daughter's bed. Its cold here and she might be needing it at her new house.

How lucky is your daughter, I'd love to have this on my bed. A cute dog by the way.

oh, this isn't for my daughter. It is for the little daughter of a friend. Since she did the embroidery I felt it was only fitting to make something for her. She was over yesterday and I susprised her with it. She'll have to wait a bit till its quilted, but I want to get it finished in the next week.

I'm so glad you visited my blog, because that led me to visit here. This is so fun and eclectic--I look forward to reading lots more!

I'm pleased you found my E-Ink reader review of interest.