Shades of Grey: A Novel by Jasper Fforde 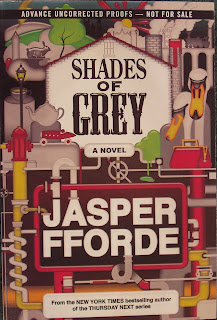 Imagine a world where your ability to see colour is your most valuable asset and your next most valuable is your spoon. Jasper Fforde has created such a place in his latest novel.
.
Months before he is to take the 'Ishihara' and determine his colour competency, Eddie Russett is sent with his father, a Swatchman(health practitioner) to conduct a chair survey in East Carmine, a distant, rural location. He has started to question his life and the way things are done and 'head office' doesn't want anyone to upset the rules of the collective. What could go wrong by sending him to a remote location with his father to watch over him?
.
If he hadn't met Jane, a Grey, who appears to flaunt every rule she comes up against he might have got along just fine. Unfortunately Eddie is instantly attracted to Jane and that spells trouble for him.
.
I was fascinated by this book. In fact, I was distracted from the story a few times by thinking about the possibilities of this world. What would it be like to one see in one colour, for Eddie, he only sees red but lots of red. Mr. Fforde has devised a complex world that follows the rules of Munsell including the banning of the number that occurs between 72 and 74, being forbidden to count sheep, and not making new spoons. The idea of the Apocryphal man, who was treated as invisible, was most intriguing. I don't think that I could ignore a person who walked into my house just because some rule defined that he didn't exist.
.
While this is a fanciful world it does bear close resemblance to ours with a Yellow family of bullies and various political intrigues/conspiracies. I can't wait for the next book in this 3 book series.
.
Thanks to Penguin books for my advanced copy.
.
You can read Corey Redekop's review over at 'Shelf Monkey'
Visit Chris over at Book-A-Rama for another good review.
Also see what Marie has to say at Daisy's Book Journal.
.
You might also be interested in:
'The Island of the Colorblind' by Oliver Sacks
.
Another book with colour based segments of society is 'Only Forward' by Michael Marshall Smith. You can read my earlier review by clicking on the title.
Posted by Heather at 21:48

I enjoyed Jasper Fforde's "The Eyre Affair" and while I noticed there were more Thursday Next novels I didn't make the time for them.

"Shades of Grey" sounds fun and I'll keep an eye out for it on the shelves.

I'll have to look up that Smith book. I enjoyed his SPARES.

Hi Corey,
I haven't read 'Spares' but sounds intriguing. Will be on the lookout for it. Thanks.