Contest: Those Red, Canada Olympic Mittens: The hottest commodity in the Country

Were you able to get yours?  I'm talking about the hottest item in town. Those red Olympic mittens that every Canadian is trying to lay their hands on (ok, maybe not every single person).  I had been trying to get them since November, but they were selling out faster than Tim Horton's coffee. 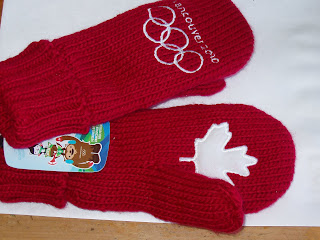 By the beginning of January over 1 million pairs had been sold.  Of the $10.00 price, $4.00 goes directly toward supporting Canadian athletes.  Finally there were more in the stores and I was able to purchase 4 pairs last weekend.  I was skeptical that they would be warm enough, but they are thick and have some sort of warm fuzzy lining.  I have been wearing mine all week and will be wearing them indoors as I watch the various competitions.  I think it might make knitting a little more difficult.
.
Yesterday I was at the postal outlet mailing a pair of them to a friend in New Zealand. When the employeed asked the contents of the package, so she could complete the customs declaration,  I proudly stated 'Mittens'.  She asked if they were the Olympic ones and proceeded to tell me that she has had lots of people in mailing those mittens all over the world.  Cool.  and I thought I was the only strange person mailing mittens to a place where it is summer right now.
As soon as I find my address book, I'll be mailing another pair, this time to Australia.
As I have been typing this, I have decided to have another little contest.  This one is open to a follower of this blog who does not live in Canada.  To gain extra entries
1) blog about this contest
2) Tell about this contest elsewhere, twitter etc.
3) Show me a picture of the gear that your country will be wearing when they compete in Canada in the next few weeks.   email picture to heatherdpear @ hotmail dot com
Leave one comment with all your entry information.
** Special, If you live in Canada and want to join the fun, you can enter (become a follower) and have me send the mitts to someone else (international).
You have 4 chances to gain entries.  There are 27 followers of my blog.  When I hit 50 followers I will buy a second pair of mitts.  The Olympics start friday, and I will draw for a winner(s) on February 19.
My sister has posted additional pictures of these mittens on her site 'Give away a Dollar A Day'
Check out my other contests that are closing on Tuesday February 9

Email ThisBlogThis!Share to TwitterShare to FacebookShare to Pinterest
Labels: knitting

Hi Heather,
Thanks for stopping by my place. It took forever to get Life of Pi to the top of my TBR list too. Great book. Please enter me in your contest for the mittens. They look so warm.
1. Posted at my blog
2. Posted at Twitter
3. Sent you a photo of U.S. gear.
4. Am a follower of your blog.

Have a great day!

Hi Sherrie,
Thanks for joining in my fun and warming contest. Look forward to seeing what all the athletes will be wearing.

your mittens are great such a lovely color of red. I too will be watching the Olympics I love the winter ones.
Karen
http://karensquilting.com/blog/

What a cool (or perhaps hot?) competition. And the idea of you knitting with these mittens on! LOL

1. My 200th post dedicated to this contest.
2. Let all my facebook cronies know about this cool contest (and secretly or not so, hoping they do not enter as I want to win!)
3. Emailed you the USA ice hockey jersey photos
4. Follow and anticipate daily updates of your blog!

Good choice Heather. I will happily post your contest on my blog and twitter. Since I am in Canada I won't share a picture of the superb red and grey Olympic knots BUT if I win I will nominate my nephew Tyler to receive the mittens. He is in NJ and is dedicated to football and wrestling.

WOW, what a great giveaway! We are following this years Olympics, and have friend who is working towards the next winter Olympics in speed skating! We are in the US. I am signing up as a follower of your blog!

Please enter me in your give away, those mittens are way cool! I am in the US and am signing up to follow your blog!

I just became a follower. Those are lovely mittens! Canada usually has such snazzy team outfits.