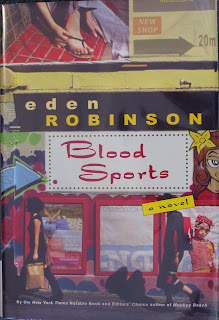 I didn't love this book.  In fact it scared me.  Drugs, pornography, murders and random violence.  This is a world that is so foreign to my comfortable, middle class existence.  It kept me on the verge of tears, and created a knot in my stomach that threatened to tighten with each violent act.

Tom and Paulie are trying to escape all this for the sake of their young daughter Melody.  They are having a rough go of it.  Paulie attends daily NA (Narcotics Anonymous) meetings and has kept clean for 3 years. Between his alcholic mother and his psycopath cousin Jeremy, Tom's not having much success.  He has done things with and for his cousin that few of us could ever imagine.  Using a sledge hammer to pound human bones to shards being one that made me cringe.

This story is gritty and it gets right into your soul.  I'm not going to embrace it and remember it fondly.  Its going to come back and haunt me.  I am going to see each of these characters as I walk along some dank, shadowy alley.

One thing that I found made this book so successful at conveying this creepy feeling was the way the story jumped around in time.  If it had been told beginning to end, I could have dealt with that.  I was kept unbalanced by not knowing when I was at all times.  Very successful technique.  I would definitely read more by Ms. Robinson, she can use words to create realities so vivid that I had to pull my quilt tighter around me after making sure all the lights in the room were on.

Ms. Robinson was recognized by Random House in their New Faces of Fiction 2000.

A brief bio at McClelland  and Stewart.

There is a wonderful interview with Eden Robinson in the 'Quill and Quire' December 20005 issue.

There are some wonderful examples of Haisla artwork at the Spirit Wrestler Gallery.
Posted by Heather at 12:24

Great review! This sounds really depressing. Even more depressing than when I have to drive through downtown Vancouver and see real people living this horrible life. At least just driving through I don't ponder on individuals.

Thanks for the review. Doesn't sound like something for me -- maybe for my wife -- and the interview with Robinson in the Quill & Quire was very interesting.