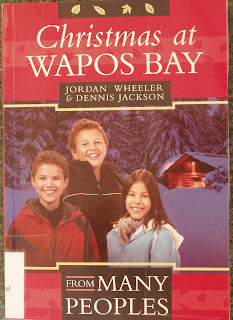 It is the days leading up to Christmas, and Talon, Raven and T-Bear are staying with their Mushom (grandfather) checking his trapline and keeping an eye out for animals.  They are hoping to bring home enough food for their families for the holidays.  The hunting has been bad and the children decide they will sneak out early on Christmas eve morning and go hunting.  Unfortunately they don't notice the approaching storm.

This is a good coming of age story set in Northern Saskatchewan.  The three children have been learning survival skills from Mushom.  It is not easy to live in the bush and keep a trapline, and Mushom is getting old and wants to pass tradition along to one of his grandsons.

I found this a very well written story.  The grandparents have kept many of their traditional Cree ways of life (living on the land) yet their children have all moved to the city and could longer hunt nor trap.  The children seem deeply attached to the lessons of life that Mushom is teaching them.

Jordan Wheeler is the author of several novels as well as writer/editor for shows such as 'North of 60', 'The Rez', and 'Big Bear'.

Dennis Jackson is a film writer/producer, who with his wife, Melanie Jackson, operate Dark Thunder Productions.

I have not watched the television version of 'Wapos Bay'  but will be on the look out for it in the near future.

This is my 16th read for the Canadian Book Challenge.
Posted by Heather at 10:40