The Gate House by Nelson DeMille 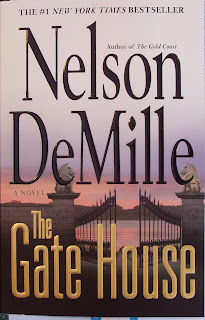 John Sutter spent 3 years sailing the oceans and then 7 more in self imposed exile in London, England.  Now he has returned to Long Island, New York to settle the affairs of his client and friend Ethel Allard.  His ex-wife Susan Stanhope Sutter has also returned and is living in the old family home, metres from Ethel's cottage where John is staying.  This wouldn't be too bad, unless you consider that the last day they lived together as husband and wife, Susan had murdered her lover Frank Bellarosa, mafia don.  If that doesn't sound complicated, factor in that Frank's son Anthony, amother of his new neighbours, has paid a visit to John, and asked if he'll work for him.

This is the longest book I have read in some time, 770 pages.  I will admit to being ambivalent for the first 100 pages, not sure that I wanted to continue.  I questioned whether I wanted to read a story about the mafia.  I kept at it, and somewhere around page 120 I was totally hooked.  I realized that the story was about John and Susan.  What had happened in their marriage and did they want to do anything to 'fix it'.  John also had to consider the other women in his life, Samantha and Elizabeth.  Were they important to him or rather a means of marking time.

At the same time John had to deal effectiving with Anthony.  How to tell a mafia don that you don't want to work for him, but also keep breathing.  I enjoyed how this story played out.  My favourite quote from the story:

"you're not supposed to invite a vampire to cross your threshold, and I think the same rule applies for sons of dead Mafia don's."

I am glad that I continued reading as I found myself enjoying the characters more and more as the story went along.  I can't fathom being as wealthy as Susan's family, but can visualize the challenges John faced in dealing with her parents and the threat of her being cut off from her inheritence.

Mr. DeMille has written 15 novels, one of which has been made into a feature movie. For a complete listing of his books visit Nelson DeMille's website.

Thanks to Hachette Book Group for this review copy.
Posted by Heather at 19:25

I really enjoyed this one, too, but I'm a fan of DeMille's work.

Thanks for sharing your thoughts. I have this book on my shelf and I'm sure I'm going to find the 770 pages daunting. I'll use your review to remind myself to stick with it. ;)

Hi Heather,
Sounds like a good book. I'll have to check this one out. I sometimes have to do that myself, keep going even though I'm not interested. Most of the time it pays off. Your quilt is looking really good! Have a great day!

Oooh, that quote made me laugh, so I'm definitely going to keep this one in mind. Glad you stuck with it!