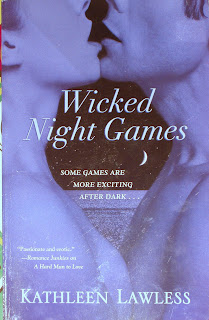 The story begins aboard the 'Fantasy Cruise Line' where Cassidy Ferrill is seeking revenge on Sloan Hardt because he broke her heart years ago when they were both much younger.  On this ship any fantasy can be fulfilled.

For me, the best part of the story involved the shelter for young/unwed/needy mothers and children that Cassidy was working to establish.

A fun read, not much depth, but then again this genre doesn't need depth to be entertaining.  Author Kathleen Lawless has several other titles available.  Check her website for details.

This is my 18th read for the 3rd Canadian Book Challenge.
Posted by Heather at 14:28

Sounds like a good read for these dreary winter days when I WISH I could be on a romantic cruise!@LOL