Gone But Not Forgotten by Phillip Margolin 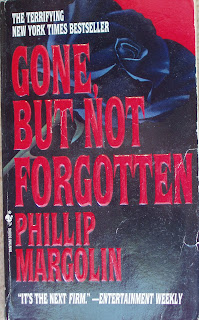 Do you like to be scared?  What about when you get that creepy, sick feeling in the pit of your stomach?  If you do, then this is the book for you.  Yes, I had to think twice about going up to bed alone last evening.

Peter Lake has return home from his law office to find his wife and daughter brutally murdered.  Police in Hunter's Point, New York have blamed 'the rose' murderer due to the black rose and the note 'Gone But Not Forgotten' that we left at the scene.

Ten years have elapsed and the killer appears to have resurfaced in Portland, Oregon.  New York homicide detective Nancy Gordon has flown to Portland the offer her expertise, unfortunately she dissappears with a day of arrival.  she did reveal that local developer Martin Darius is actually Peter Lake.
Now its up to Martin's lawyer Betsy Tannenbaum to get to the bottom of this before anyone else is murdered.

I was never comfortable while reading this book.  The whole way through I had this feeling that something bad, real bad was just about to happen.  And it did, several times.  Considering that this story is a thriller, I have to admit that it was very successful.  Mr. Margolin even had me feeling some empathy(?) for the psychopath for a few moments.

Even though this story 'creeped me out' I do look forward to reading some more of Phillip Margolin's  15 or so novels.

See my earlier review of  'Executive Privilege'
Posted by Heather at 17:50

Oooo, that sounds really interesting! I love thrillers, although I don't read that many of them. I'm working on that book you gave me yesterday, but I haven't been able to focus on it... Maybe I'll have better luck if I take it to school!!

This was a great book! I loved it. Definitely a favorite author of mine.
Krista

Not the book for me I'm afraid to say. Still frightened of the dark it doesn't take a lot to have me sleeping with the light on.

This is a great book and I really like Phillip Margolin's books-always a good read.

This was also made into a movie-it was actually pretty good. Now of course, I remember scenes from the movie instead of the book-always a bummer.