The Hidden City: Novel of the House War by Michelle West 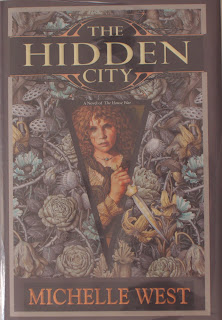 Have you ever wanted to escape into a world that is different from ours, but still familiar?  A world where magic exists, but is limited in it's approved uses?  Where life is simpler?  If you have answered yes, then its time for you to visit Averalaan.  This is a city (country?) ruled by twin kings and by the 12 main family houses.  It consists of the Isle where the wealthy ruling class reside and the mainland which is divided into 100 holdings (neighbourhoods?) not all of which would be considered 'safe'.

Jay (Jewel Markess) doesn't live in any of these places, rather she lives under a  bridge near the river.  Her life there would have been a short one had she not been 'found' by Rath.  Generally a loner, he felt compelled to take the orphan home and care for her.

I really enjoyed how this story played out.  It started with Rath and through him we are introduced to this new world which is at a pre-technology state, but which has 'mage lights' spelled globes you can hold in your hand and command varying levels of illumination.  Cool,no replacing light bulbs.  Bit by bit we are introduced to additional characters and further complexities of Averalaan life.

Much like we have geniuses and savants, their world has those who are talent born.  They have innate abilities.  The God Born form the judicial as they can't be lied to .  Jay has one of the rarest of talents 'seer born' and already at this untrained stage it is changing the directon of both her and Rath's lives.

At the root of all these happening is the old city which lies buried beneath the living city.  Some ancient cataclysm killed its inhabitants and buried it from view, or at least from the view and memory of almost everyone.

This is a long book, over 600 pages, and the action builds from the first pages until it errupts in a frenzy near the end.  My favourite passage occured just before one of the first fights in the book.

I am a fencer and had just bought my own foils the day prior to reading this passage.

There were a few times when the author, Michelle West, gets a bit wordy.  A couple of times my eyes glazed over a bit, they still followed the words across the page but I have no idea what I read.  Politics or philosopy, obviously it didn't stop me from enjoying or understanding the book, but could have gone without those pages.  I have the second book in the series "City of Night" and am looking forward to reading how Jay deals with her 'talent' and whether she stays with Rath, her reluctatnt guardian/provider/protector.
Posted by Heather at 17:41

I like the plot of this book. Something a bit different than just strictly magic.

And you are into fencing. That's very cool. I've always been interested in that, although I have no idea where to go to find out. ENjoy.

This sounds interesting - a good one for when I'm in the mood for a chunkster!