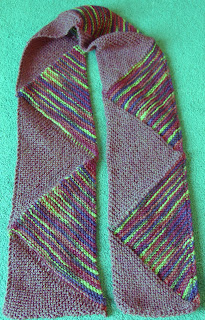 I thought I was done with knitting scraves, but I still had 2 balls of wool sitting with tha pattern and If I didn't knit them up now, they might still be sitting there in a couple of years.
The pattern is from Lion Brand and is called 'Yin Yang Scarf'.  I had intended to purchase the yarn that was called for , Lion Brand Wool Ease, but it must not have been on sale as I ended up with Patons Classic wool in Cognac Heather and Harvest.  I used 5 1/2 mm needles.  This is a very quick pattern to work up.  Once you cast on, you don't have to pick up any additional stitches, instead, you knit partial rows with an increase at  the start and knit 2 together at the end of alternate rows.

I enjoyed the pattern so much that I went out and bought more yarn.  This time for a child I selected Red Heart kids  in Yellow and Bikini.
Note that the original pattern is made in one colour of yarn.  I adapted to knit with two.  I had to knit one more row at the end of each triangle so that the yarn ends would be at opposite ends.  This way I didn't have to deal with darning in ends all the time.  My sister had knit this pattern in 2 colours and it looked wonderful.  My other sister chose that one as a gift.  Darn I don't have a picture to show you.  I will ask my sister for a pic.
I really have had enough of knitting scarves and am going to challenge myself to knit hats for the remainder of the year, when I'm not working on the 2 afghans that I need to finish by Christmas time.  Do you have a favourite hat pattern?  If its available online, send me the link.  Thanks.
I was at one of my local yarn shops the other day and they had their version of the Bernat Knit along Afghan displayed in their window.  looks like they chose 2 of the same colours as I did.
Posted by Heather at 11:59

Very cool scarf! I am going to start knitting sox-my friend has me hooked, she uses merino wool blend. I'm going to try cashmere! I will let you know how I do. I only knit when DH drives so it takes me a while.

REally cute scarf! I so want to learn to knit this year....love the colors in the first one. Have a great weekend.

This looks like a great way to use up bits of wool from other projects. You could make each triangle a different color if you needed to ...