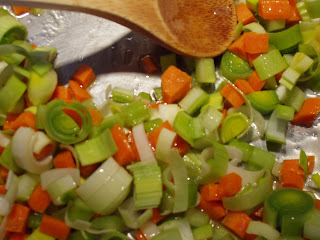 Now that we have moved into March, I thought I would try out some potato recipes in honour of St. Patrick's Day.  Earlier this week Petty Witter was talking about St. David's Day and mentioned that the leek was a symbol of Wales.  I knew that a potato and leek soup would be the perfect meal to make.  I used the recipe from the Canadian Living website: Leek and Potato Soup.
The first picture shows the leeks, carrots and onions sauting in the canola oil.  Don't you just love fresh vegetables.  The soup is put in the blender after cooking, or use an immersion blender, and garnished with shredded cheddar cheese and crumbled bacon.
I didn't add the salt as I try and use as little as possible. 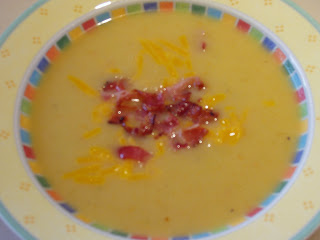 Husband and daughter both enjoyed this soup.  We did cook up a few extra slices of bacon for nibbling.  You could easily make this for a vegetarian by using vegetable broth (thats what I did) and leave off the bacon.
I'll be looking for another potato recipe for next week. 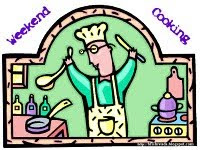 To find out what else is cooking, visit Beth Fish Reads for her Weekend Cooking meme.  Join in with your link to your cooking related post.

There are few things I enjoy more than a good bowl of soup on a cold winter day!

Looks so yummy, I can almost smell and taste it.

We love soups, and this looks delicious!

This looks perfect for a cold rainy eve.

Oh wow! I love leeks and this does sound yummy.

good timing! i just turned over the soil in my garden and found some potatoes from last year.