Storm Front: Book One of the Dresden Files by Jim Butcher 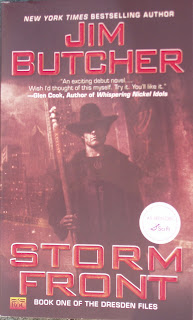 "Wizards control their power.  They don't let it control them.  And wizards don't use magic to kill people.  They use it to discover, to protect, to mend, to help.  Not to destroy."

Harry Dresden is a wizard who also happens to be a Private Investigator.  Upon occasion he works with Lieutenant Murphy of the Special Investigations Unit of the Chicago Police Department to solve 'unusual' crimes.  In this instance, two people were murdered when their hearts were blown out of their bodies.  Not typical in any manner.

This is a terrific start to the series that spans in to 12 novels and a number of short stories as well as a tv series.  I was drawn to Harry right from the start.  He's a little rough around the edges, living day to day, and he deals with all segments of society.  Technology doesn't seem to function for long around him, so he has to rely on his magic training and wit to solve his cases.

Throughout the book the reader is given glimpses into Harry's past.  His mother died when he was young/born (not sure which) and he was raised by his father, but he has his mother's silver pentagram necklace.  Was she a wizard also?

I am left with the mental picture of Harry in sweatpants and cowboy boots.  That topped with the long black duster works for me.

I must thank my friend Brendan for urging me to read this book.  Will definitely be looking for the next in the series.

You can learn all about Harry Dresden by visiting his creator's (Jim Butcher) website.
Posted by Heather at 14:14

I watche dthis seris on the Sci-Fi network and enjoyed it. Was sorry to see it go. I'll have to give these books a try. Thanks for the recommendation.

This series is somewhere on my To Read list, along with about a zillion and a half other books. I wish I had more time in the day to devote to reading, because I've heard such good things about the Dresden Files series.