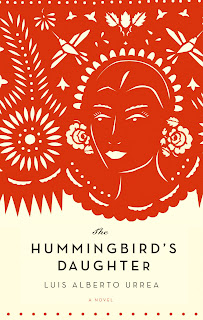 If you are going to read only one book this year, I would highly recommend The Hummingbird's Daughter by Luis Alberto Urrea.

I downloaded the audiobook from my library and spent the last week or so listening to it in rapt attention.  Today, while listening to the final three hours, I often stopped and stood in place to give all my attention to the unfolding story.  I couldn't do another thing, just listen to the author as he told the story of Terese Urrea, a distant family relative.

Terese was born to a teenage mother who lived and worked on the Urrea ranch in Sinaloa, Mexico in the early 1870's.  When she was two years old, her mother abandoned her to the dubious care of her aunt.  At some point after that she came to the attention of Huila, the midwife and herbalist/healer on the ranch.  Huila realized that Terese was special and kept an eye on her till she was old enough to be taught in the care and healing of the people.

This novel is a combination of fact and fiction.  It truly brings Terese to life. I could easily imagine her as a little girl in Sinaloa and as a teenger finally being "recognized" by her father when she was living in Sonora.  The vivid descriptions of the "plaza" with its white benches, strolling path and central white gazebo transported me to a dreamland.  I could imagine the women as they strolled in one direction, meeting up with the gazes of the men who were travelling in the other direction.  The thought of the old people, including Huila sitting on the benches chaperoning everyone was so fitting.

I don't want to give away too much plot in the story other than to say that young Terese becomes a most powerful force in Mexico.  Her message to the people that they land belongs to them and not the government is seized by many and held close to their hearts.  They were ready to revolt against the government of President Diaz.

While much of the later part of the story is of a more serious nature, there are many lightheart scenes to keep the mood in balance.  I particularly loved the flowery salutations of the letters that Tomas, Terese's father, writes to friends and the salutations of the ones he receives in return.  I was practically rolling with laughter.

I felt that my enjoyment of this book was greatly enhanced by the reading skill of the author.  The wonderful pronunciation of the Mexican place names and phrases would have been bland had I spoken them, but they were rich in timbre and inflection rolling off Mr. Urrea's tongue.

Winner of the 2006 Kiriyama Prize.

This is my second read for the Read, Remember Recommend Challenge.

See my earlier review of Into the Beautiful North also by Luis Alberto Urrea.

Visit the Hachette site if you would like to Browse Inside The Hummingbird's Daughter.

Thanks to Hachette Book Group for the two cover photos.
Posted by Heather at 20:46

That's a great blog you've got there buddy!

Do you think you can check out mine?

Hi Heather,
This sounds like a great book. I'm going to have to put it on my ever growing TBR list. Thanks for stopping by. Have a great day!

This book sounds really good. It's now on my wishlist. I loved "Into the Beautiful North" and can't wait to read this one.

Nice blog you got here... Just droppin' by to say hi! http://www.arts-and-entertainment.info