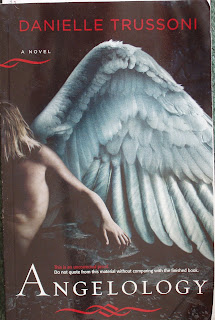 This book opened a door to a whole new world, a world where angels and their ill-begotten offspring have infiltrated the human population of earth.  It seems that the only good angels are those still resident in heaven and that those on earth are tarnished since they betrayed God's trust and cavorted and bred with earthly women.  Their hybrid children, know as nephilim, are not good.  They seek the downfall of humanity and to set themselves above consideration of all others.  There are other non-human beings that inhabit the earth, who at times will co-operate with the nephilim.

Sister Evangeline, of the Franciscan Sisters of Perpetual Adoration, has been drawn into this centuries old mischief.  Unknown to her, she holds the key to either healing or destroying the angels and their spawn.  She was born into a family of angelologists who are seeking to elminate the danger of the angels from the earth.

Author Danielle Trussoni has reached back into history to set up the structure and existance of the angelologists.  She cites a number of historical figures and events and attributes them as member or as pivitol points in the angel/earth battle.  A very believable approach.  The hardest part of this story for me was to understand that the angels aren't good.   In my mind, angels represent good.

While I did side with Evangeline throughout the story, I also found that I wanted Percival (a bad nephilim) to be healed (you'll have to read the book to find out what he needs to be healed from), to see if it could really be done.  Ms. Trussoni was able to paint a word portrait of Percival that made me want to like him.  I came to feel that his extremely good looks must somehow compensate for any foul deeds attributed to him.  I did find it interesting , that even though Percival is hundreds of years old, he is still seeking and craving the his mother's approval.

The author has created such a complete and complex world that I fully expect to see in a follow-up to this book.

I have seen it written that "Angels are the new Vampires", but I don't know that I would go that far.  It is an intriguing world of possibilities, but I wonder  if angels as bad beings will go over all that well.  I guess time will tell.

To learn more about this book, visit the RandomHouse.ca site.

Mortal Instruments: City of Bones,  City of Ashes, City of Glass by Cassandra Clare (my daughter's friend recommends this series

Further Reviews of this novel:

Candace at Beth Fish Reads
Posted by Heather at 16:53

I keep hearing wonderful reviews about this book, and every time I read a new one I think to myself that I really need to get myself a copy! I think after reading your review, I'm finally going to put my money where my mouth is and go buy it! Thanks for the rec!