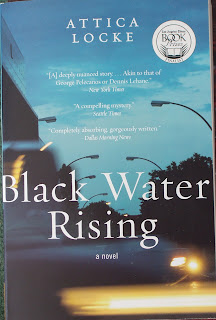 It's 1981 and Jay Porter is a young, black lawyer in Houston, Texas.  As a university student he spent much time involved in civil rights walks and protests.  He thinks he is done with that, now he was preparing to become a first time father and is building his struggling legal practice..   He finds that life has a way of telling you when you have unfinished business.

While the black population  now appear to have all the same rights and privileges as their white neighbours, they are still earning less for performing the same work and not being promoted regardless of merit.  You will have to read the book to find out what this refers to.

Jay is torn between his memories of what he personally has struggled to overcome and the possible risks to his freedom and the safety of his wife and unborn child.

I think that Bob Marley said it best, "Emancipate yourself from mental slavery, none but ourselves can free our mind..."

Jay will not be truly free until he is free in his own mind.

Within the first pages author Attica Locke had my empathy for Jay while he was on trial.  As she described the bus load of church woman who attended each day of his trial, I could picture those women dressed in their sunday best and sitting for hours in that hot courtroom to show support for a boy they didn't even know.  It's bringing tears to my eyes to even think that there truly are people who would do that.  From that point on I was totally on Jay's side; I knew that he was a "good guy" and that he would ultimately make the right decision, whatever that might be.

I was a child when these marches and protests were happening.  I didn't read the newspaper yet, so I missed the whole thing.  If my parents had talked about it, it wasn't when I was in hearing range.  I found it informative to read the details of such a pivitol point in American history.  It never felt like a lecture, it flowed in and blended with the story.


2010 nominee for the Hurston Wright Legacy Award.
This book is one of six books that has been shortlisted for the Orange Prize for Fiction.  I feel that it's an excellent choice.  Along with being a skillfully told story,  it also addresses unresolved issues in our society.  There are still many ways in which various groups of people are not treated equally and I feel that we are all diminished as long as that is happening.  I am ranking this ahead of Wolf Hall .  While that one was a terrific book, I feel that Dark Water Rising is more socially relevant at this time.

Read what Deanna at My Tragic Right Hip say about Black Water Rising by Attic Locke.
Read what  Carina at Reading Through Life has to say.
Marie has posted her review at Daisy's Book Journal.
Petty Witter has posted her review at Pen and Paper.  Her comments are quite different than mine, so be sure to visit there.  Petty Witter's husband has jumped in with his comments also posted at Pen and Paper.
Thanks to HarperCollins for my review copy.

Since I can't get it out of my head, I added in a link to Bob Marley's Redemption Song.

I also reviewed this one a couple weeks ago - I loved it, though I spent most of the book wanting to yell at Jay for some of the shit he was doing! If you want to read it, my post is here. :-)

Great review. This one is next up for me.

I would also rank a socially relevent book ahead of a HF book. Great review.