The Bridge of An Luis Rey by Thornton Wilder - audio 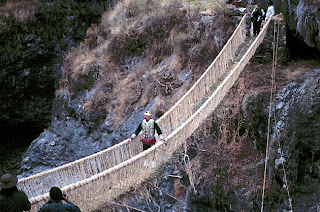 Could you imagine crossing a raging river by means of a bridge made from braided grass.  Not a thought I am comfortable with.  It could collapse beneath my feet.

Thornton Wilder was inspired by a such a collapse that occured in the 1890's in Peru over the Apurimac River.  In his 1927 book he ponders the lives of the people who were lost in his fictional bridge collapse.

Brother Juniper, a Franciscan monk, witnesses this collapse and while most people thank God that they weren't on that bridge, he wonders why God choose that moment, when those specific people were on the bridge, to tumble the bridge into the river.  He spends the next six years investigating the details of the lives of those five victims to try and find a scientific rational.  Did these people know each other, were they tied together, were they good people or were they bad, was this a punishment or a reward that they died at that moment.

Very quickly our narrator, Brother Juniper, delved into the life of the first victim Dona Maria the Marquesa de Montemayor.  I was a bit confused as to why we were being told all these intimate details of her life, but figured if I kept listening all would be made clear.  Perhaps I missed a detail as I was driving while listening and my attention was foremost on the road not the story.  Turned out that I needed to know the true person to Dona Maria to understand her frame of mind and her relationship with her daughter so that I could later understand her death.

The life of each victim of the diaster was equally presented; Pepita, the companion of Dona Maria; Esteban, the surviving orphan twin; Uncle Pio, man of all trades; and finally little Jaime, sickly young boy, nephew of sorts to Uncle Pio.

Mr. Thornton had me convinced that this story was absolutely true.  That he had travelled to Peru and searched out the documents of the Friar and presented a synopsis of that massive tome.

So what did I get out of this?  That we are put on this earth for a reason, to learn a lesson that perhaps we didn't learn in a previous life.  Each of these five people had reached that point in their lives where they had to answer or face that final question  and because they showed they had learned that lesson, they were granted the grace of dying. Next they could be reborn to a new life and a further lesson to be learned.  I don't know what you will find when you read this book, but that's one of the great things about reading, we can all read the same words and we each can get something totally different from them.

The picture shown above is of a new grass bridge made by the Inca in June of 2003.  Visit the website: The Last Inka Suspension Bridge: A Photo Album  for a wonderful photo tour of the building of one of these bridges.  (the picture was borrowed from that site)

The Thornton Wilder Society has information on other books by this author.

The Bridge of San Luis Rey won the 1928 Pulitzer Prize.

This audio book (which I downloaded from my library) is produced by Highbridge Audio and is read by Sam Waterston.

This is my third read for the Read, Remember, Recommend Fiction Challenge.  It's not too late to join in the fun. Contest runs till April 2011 and you have the chance to win some fun prizes.
Posted by Heather at 10:02

Sounds like a fascinating read but that bridge makes me feel dizzy just looking at it.