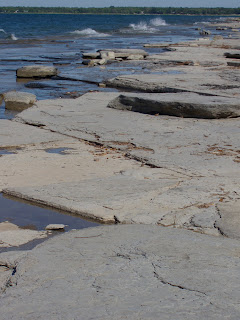 It was a wonderful weekend for camping.  The skys stayed clear, not too hot, and no injuries.
It was about a two hour drive almost directly north to Craigleith, Ontario to the Provincial Park.  It's located on the shore of Georgian Bay which is still rather cold at this point of the year.  The ground here is formed of layers of bituminous shale which lead to the short lived lamp oil refinery. A commemorative plaque has been placed in the park. 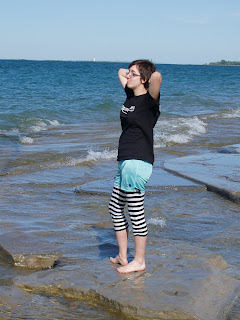 Daughter spent hours walking and posing on the beach. As I walked near her, I heard her singing opera along with the waves. I don't know if she was singing in response to the swell of the water, or if the water was listening to her and responding in the only way open to it. 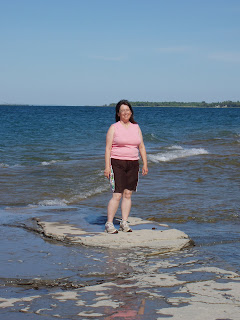 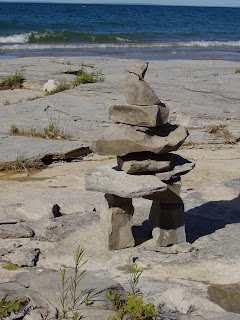 Way down the beach I found this inukshuk.  It has no arms.  I found the cut edge of the shale very interesting to look at. 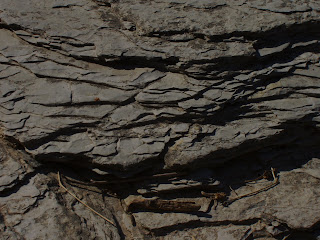 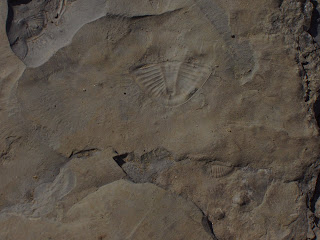 Don't know what the fossil is in the final picture.
I told you that I was taking a bunch of books with me.  Eleven books that I registered with Bookcrossing.com  were released to the bookshelves in the ranger station and three books were picked up from there.  Hubby finished one, and is reading another.  I took one and finished it last evening.  I also finished The Lacuna by Barbara Kingsolver and then started and finished Brewed, Crude and Tattooed: A Maggy Thorsen Mystery by Sandra Balzo.  On the ride home I started Demon Seed by Dean Koontz, which I finished later that evening. These three books will be reviewed this week along with Bel Canto by Ann Patchett (audio version), and Angelology by Danielle Trussoni.
Since I had to feed us anyway, I tried a new recipe and daughter obliged me by taking a few pictures of the process.  Will post those in my Recipe Thursday meme.
Posted by Heather at 14:43