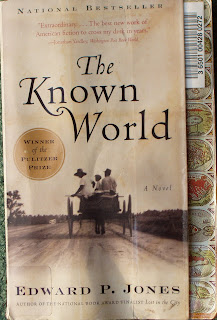 Henry Townsend was born to Augustus and Mildred Townsend, slaves on the plantation of William Robbins in Manchester County, Virginia.  We first meet him at the time of his death, around 1855, when he is a just 31 years old.  From there we learn how a black man came to be free and how he managed to purchase property as well as the slaves to provide labour for the running of the farm.  We also meet the other free black people who surround him and the white people who control Manchester County.
In the opening chapters of this book the reader is diluged with the introduction of the many characters and their connections with each other.  Each character is tied with numerous other characters in this story.  Their livesweare so tightly woven together that a happening with one resident of that county would affect the lives of dozens of others, black and white alike.  I had to reread the first forty of so pages to get all these connections straight, though there is a complete list and description of characters at the back of the book.
Once I got past the introductions, the story flowed quickly and begged not to be put aside.  By that point I had no doubt that this story was a fictionalized, though true, historical account.  That these were real people who's lives had been documented in the state census and in plantation ledgers.  I was truly surprised to find that it was all a work of fiction.  Having said that it was fiction I believe that many of the event depicted did occur during the times when slaves were held in the United States.  Black people worked as overseers on plantations, that they learned skills that enabled them to earn money with which to buy their freedom, and that there were white people who would never see them as free and equal people.
Plot spoiler
One of the most difficult passages for me to read was when Augustus was detained by the slave patrollers and sold back into slavery.  The tears were rolling down my cheeks unchecked.   It did help when a bit later in the story, Barnum, the only patroller who objected to the enslavement, confesses the events to the sherriff.  Barnum knew that what they had done was wrong and he wanted to do the right thing. He called for a stronger law or some sort of "body" that could discern right and wrong to ensure that this didn't happen again.A moment of true insight.
This book provides many opportunities for discussion: interactions between the free and the enslaved blacks, the treatment of the free blacks by the white population, and the very act of slavery then and today.
Winner of the 2003 New York Times Best Book of the Year Award for Fiction
Winner of the 2004 Pulitzer Prize
Winner of the 2005 IMPAC Dublin Literary Award
As a companion read, I highly recommend The Book Of Negroes by Lawrence Hill.  Click the link for my earlier review of this title.

This is my 4th book for the Read, Remember, Recommend Fiction Challange hosted at Bibliobabe.com.  You still have lots of time to join in the fun as the contest runs till April 2011.
Posted by Heather at 12:27

Nice review. This book is on my bookshelf waiting to be read.

If you want to read more books by this author, I'd recommend "All Aunt Hagar's Children", which is collection of short stories.

This one sounds really compelling.

I read a very fine thriller recently, and in that one it was also difficult to keep tracks of the characters in the beginning but it was well worth it.

Sounds like a fascinating read, one to be added to my wish list for sure.
I have not long since read a book about slavery - The Long Song by Andrea Levy. Yet to be reviewed on my blog, but I'll tell you I was very disappointed by it.

It's been years since I read this, but I do remember having trouble getting into it, but once I did, I thought it was great.

Sounds well worth getting past the initial confusion over characters.