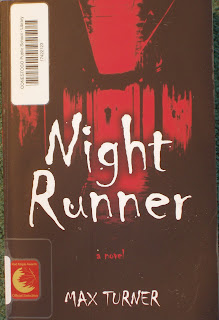 I have been wanting to read this one since I first heard about it over a year and a half ago.  A variety of reasons, some beyond my control, kept me from it until yesterday.  Daughter brought it home from her school library.  While it is intended as a teen novel, it has enough to keep an adult interested.

Fifteen year old Zach has lived  at Peterborough Civic Hospital, in the "nut ward" since he was eight.  His father was killed in  a freak accident while on an archeological dig.  Zach was bitten by something and lapsed into a coma.  When he awoke he was changed, he couldn't go outside during the day and he had trouble eating almost any food. As he had no living family, it seemed the best choice was to care for him in the hospital until a cure for his unknown illness could be found.  All is well until one night when a man driving a motorcycle crashes into the hospital and tells Zach to flee.

The story just kept getting better from that point.  I found myself calling out to my hubby, who was raised in Peterborough, the changes in location as the story progressed.  Rather fun plotting Zach's progress threw out town and the surrounding area.

This is not quite your typical vampire novel with blood and gore and frequent feedings on unsuspecting civilians.  I can't tell you anything further without spoiling the story.  I will recommend this to anyone who enjoys a vampire story.

Click here to read an interview with Max Turner.

This is my 20 read for the Canadian Book Challenge 3
Posted by Heather at 17:37

Sounds like my kinda read! I will have to see if my library has it.

I'm such a sucker for the vampire stories. Can't wait to pick this one up! Right after I finish my exam and the 100 Mile Diet. So... June 11th.

I too enjoyed this novel and there is a review on my blog (under Young Adult Fiction). I am fortunate enough to teach with Max. He has a wicked sense of humour which comes through in his writing. I believe his next book will be out this fall. I look forward to getting my hands on a copy.