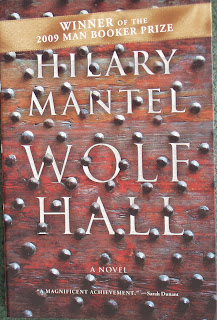 Set in the early 16th century, Hilary Mantel, through the eyes of Thomas Cromwell,  tells the story of Henry VIII's quest to dissolve his marriage to Katherine of Aragon in order to marry Anne Boleyn.  Right from the very first pages where we meet a young Thomas, who is in the process of having the beating of his life at the hands and feet of his father, I was pulled right into the story. To me it seemed that the words on the page flowed together in such a way that I had no choice but to follow them.  As the pages fled by I found myself immersed in a world that existed almost 500 years ago.
I was surprised.  When I first picked up the book I had braced myself for something I thought would be dry and maybe even tedious.  I quickly found that I was wrong.   My previous exposure to King Henry VIII was a high school study of A Man for All Seasons: A Play in Two Acts by Robert Bolt.  The play was written from the perspective of Thomas More, a man who died for his convictions rather than agree to uphold the King's annulment from Katherine.  I was attending a Catholic school at that time and surrounded by nuns, so of course I learned that Thomas More was correct and that we should pray from him and his decision.

I also learned that Thomas Cromwell was a bad man and that his beliefs were corrupt.  His protrayal in this book was nothing of the sort.  He appeared to me a man who had no choice but to make a life for himself and for those who had become dependent on him.  A roll he filled extremely well.   I hated to put the book down and I had to, I  couldn't wait to get back to it.

This is the first book I have read of the six books shortlisted for the Orange Prize for Fiction.  While I think that it was wonderfully written, I don't know that it will have a wide enough appeal to be selected as the overall winner.  Don't quote me on that as I still have five more books to read.  Next I plan to read Black Water Rising by Attica Locke.
Winner of the 2009 Man Booker Prize
Shortlisted for the 2010 Orange Prize for Fiction
Deanna, at My Tragic Right Hip is also reading the six books and posting her comments.
Thanks to HarperCollins for sending me this review copy.

This is my 6th book for the Read, Remember, Recommend Fiction Challenge hosted by Bibliobabe.com.  There is still time to join in the challenge.
Posted by Heather at 16:58