2010 Orange Prize for Fiction: My Prediction

About the Orange Prize for Fiction:
The Orange Prize for Fiction is awarded to the woman who, in the opinion of the judges, has written the best, eligible full-length novel in English.  The prize is open to any full length novel, written in English by a woman of any nationality, provided that the novel is published for the first time in the United Kingdom between 1 April of the year before the prize is awarded and 31 March of the year in which the prize is awarded.  Although the novel's first UK publication must fall within these dates, it's still eligible if it was previously published in English elsewhere.
Translations of books originally written in other languages are not eligible for the prize.
From the website of the Orange Prize. 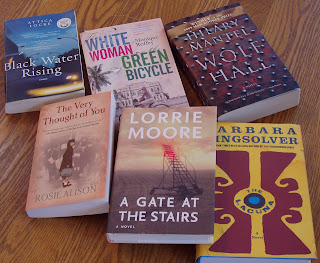 Shortlisted for 2010:
Wolf Hall by Hilary Mantel
The Lacuna by Barbara Kingsolver
The White Woman on the Green Bicycle by Monique Roffey
The Very Thought of You by Rosie Alison
Black Water Rising by Attica Lock
A Gate at the Stairs by Lorrie Moore

I have read all six books and am working on their reviews which will all be posted .  click here for links to each.
4 of the six reviews are posted as of June 8, 2010 at 11pm.

If you've been following along with my reviews, you'll know that I have removed The Lacuna and The Gate at the Stairs from my consideration.  These books didn't work for me.  I do plan to try another book by Barbara Kingsolver as I have read some excellent reviews of her other works.

While I really enjoyed Wolf Hall, it was rather long and I don't know that it would have wide enough appeal.

It's hard to make a choice from the other three.  I had to consider whether my liking them was a result of their emotional impact or if it was the actual story and how it was told.  My regular readers probably have noticed that I cry at the drop of a hat, so not the best basis for saying a book is the best.  Black Water Rising was a riviting read.  I could hardly put it down.   Great story telling. I learned about lot about the civil rights movement while reading it.

The blitz in Britain happened ages before I was born and I had not read any accounts of any of the evacuee children. While I like the characters of Anna and cried heaps of tears for her there seemed to be too much missing in her story.  Would she have truly formed such a deep and lifelong relationship with Mr. Ashton that it would still be affecting her sixty years later.

I'm putting my imaginary votes in for The White Woman on the Green Bicycle. I might have choked up for a moment or two while reading, but no tears.  I found that both Sabine's and George's reactions to moving to Trinidad to be very believable.  The descriptions of the political turmoil in Port of Spain mirror many reports I have read of that in other countries in more recent years.  A mother's hopes and dreams for her marriage and for her children never coming to fruition, all very believable.

I've written it down with a few comments, I guess we'll see what the judges think within a matter of hours.

This was a fun but stressful challenge.  Six lengthy books in six or so weeks.  For the most part I'm glad I decided to do this.  I don't generally take list recommendations blindly, but use them as guidelines whereas in this case it was an all or nothing.  Don't know that I'll do this again, prehaps with another prize, or maybe just a few from a long list and hope that I happened to hit on the winner.
Posted by Heather at 23:48

Well done you. Between Husband dearest and myself we have only managed three. HD's prediction is The Lacuna. He had hated the book at first but had ended up enjoying it - read his review sometime next week.

Hm I haven't read ANY of these yet. Oops. Good on you for reading the lot! I just heard that The Lacuna won.