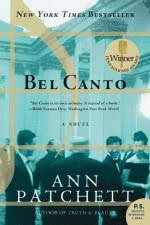 The Peruvian government is hosting a party for Japanese business man Mr. Hosokawa.  In honour of his birthday, and in an attempt to encourage him to open a factory in their country, they have hired opera singer Roxanne Coss to perform at the party.  Unknown to them, terrorists plan to invade the party and take the President hostage.  These plans are thwarted when they find that the President is not in attendence and in his place they take all the party attendees as hostages.

I listened to this as an audiobook that I downloaded from my library.  It was read by Anna Fields and produced by Blackstone Audio. When I first listened to an excerpt I was a bit put off by the thick, almost too thick accent, of the reader and I remember rolling my eyes and thinking "oh no, not another overly fake accent".  I decided to download anyway and give it a try.  I'm glad I did as I later found that the guests at the party were from many countries and they spoke a number of languages which the reader aptly portrayed.

While Mr. Hosokawa and Roxanne Coss and their budding romance were the main focus of the story, it was to Gen, Mr. Hosokawa's translator, that the greatest role fell.  Without him, everything would have fallen apart due to mis-understandings and mis-communications.  It seemed to me that he was the 'sounding board' between the terrorists, the hostages, and the outside world.  Most of the time he provided simultaneous translations, but at other times, he would wait before carrying messages between parties.  Time for reflection or just for Gen to hold onto some control?


The character of Messner, the Red Cross representative, played the important roll of keeping the story grounded.  He reminded us of the practicalities of life, food and medicine, and the realities of the situation, that this hostage taking could not go on forever.

I've never been taken hostage and I can't imagine what it would be like.  Is this story a case of Stockholm Syndrome where the hostages start to identify with their abductors.  In my opinion, the hostages grow to know their abductors as people.  People with families, goals, yearnings (learning to read, to sing, to play chess) just like themselves have lives outside of the vice-president's mansion.


Ann Patchett has written a very compelling book.  I didn't want to stop my recording when my car trips ended.  I wanted to keep listening to see what happened next.  Without giving away anything, I want to say that I was surprised by the adruptness of the ending, though it was appropriate.  I wanted the story to continue, to see the progress of the reading lessons, to have the new chess player win....

My daughter performed in her first opera this winter.  That helped to make this story more personal for me.  When I find copies of this book I want to gift them to her voice teachers if they haven't read it already.
Ann Patchett's website
Browse Inside Bel Canto
Cover photo is from the author's website.

Reading Map of my impression of Bel Canto. 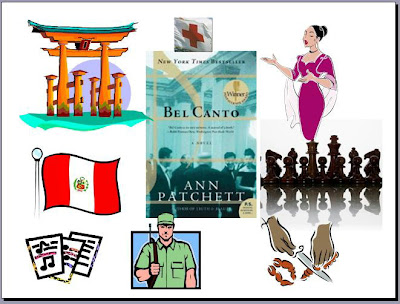 This is my eight novel for the Read, Remember, Recommend Fiction Challenge hosted by Rachelle at Bibliobabe.com

Check these other review:
Jill at The Orange Prize Project.
Musing from Sri Lanka by Mystica
Posted by Heather at 14:24

Hey! I have an award for you here!

I've read Bel Canto and it gets a thumbs up from me. I hope to read it again someday...

I have this one in my mile-high stack. Now I remember why I wanted to read it! Great review.

I read this about a year ago. It's a memorable book.

I have this on my shelf waiting to be read, too. I hope to get to it sooner or later. It sounds really good.

This was a good read. The minute details about the characters that may seem trivial in the face of their situation made the story seem very credible.

I enjoyed this book very much. I tend to read a lot of nonfiction and this ended up being the only novel I read that year. Thank goodness it was a good one !
It reminded me a bit of the TV show lost, with its large cast of characters, each with an interesting backstory.
While I did not like the ending, I thought it was a very enjoyable novel.
Nice blog you have. I will have to drop by more often.

I read that book a year or two ago and loved it! Such detail on the characters made it more real.
Karen
http://karensquilting.com/blog/