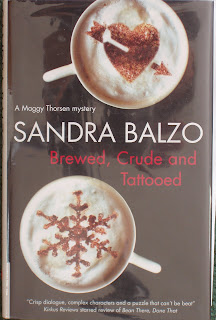 Maggy Thorsen and her partner Caron Egan run the Uncommon Grounds Coffee Shop.  It's the end of May and Brookhills, Wisconsin has been hit with an intense snow storm.  Not only has the sky gone crazy with 'thundersnow', but a murderer is lurking in the plaza where the coffee shop is located.  After discovering the body of Way Benson, Maggy sets out to determine whether the murderer is one of the persons stranded in the plaza with her or someone who has managed to escape.

That's all I'm going to tell you about the story, it is a mystery afterall.

There is a great cast of characters that are present in the coffee shop or who arrive later at the plaza.  They span a range of backgrounds and attachments or dis-attachments with the deceased.   I suspect that many of these people have showed up in earlier books in this series.  We don't learn much about each of these peoples, just enough to understand why they might want Way dead.

I am left wondering about Maggy's seemingly distant relationship with her partner Caron.  Why does she immediately suspect her of being the murderer.

I enjoyed this story. I was a perfect summer camping read.  I would have liked a bit more padding to the writing as it seemed kinda sparse at times. More details about the coffee shop and about each of the characters we met would have suited me.   You can definitely read just this part of the series and enjoy it without having read the earlier books, though perhaps, if I read them, I would get the details about the characters that I am left wanting to know.  I mainly want to know more about Maggy's relationship with Sheriff Pavlik, ther Harley riding boyfriend.

OOO, this series sounds like it's right up my alley! Thanks for reviewing it! I love mysteries and these sound like a great series for summer :) Hope my library has it!