City of Night: A Novel of the House War by Michelle West 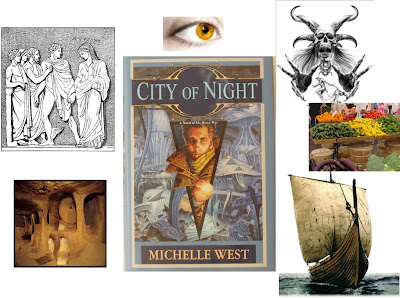 This is the second book in The House Wars series.  In the first book we met Rath and his ward Jay.  Jay has now left Rath's care and moved into her own dwelling along with the nine other members of her den.  These are fellow orphans that were trying to find their way in the hard area of Averalaan.  The newest member of the den is Angel; recently orphaned, he has chosen to display a hairstyle distinctive of his northern heritage.  (I wonder if his hairstyle will play a significant role in a future book(s) in this series).
The den members continue to forage in the undercity for artifacts until it becomes too risky to venture below ground.  Rath continues in his pursuit of those engaging in demonic practices/alliances and political intrigue.
The introduction of Angel into the story widen my view of the city.  The port area was barely mentioned an not explored in the first book.  I enjoyed learning more of the peoples who live and work there.  After this engaging view of Angel and the port I expected him to play a more pivotal role for the rest of the story.  I guess I'll have to wait for him to show his colours in  book three, of which there is no doubt that one will be forth coming.
Author Michelle West continued to build the complex city of Averlaan and its varied inhabitants.  We learned more about the Order of Knowledge and the abilities of its members.  More about the tailor Haval is revealed, though it seems there is an even greater mystery to him than I suspected.
While I enjoyed reading this installment of The House War, it left me with a feeling of marking time.  As though there is something big coming but that the reader still needed to learn more about Jay and her den as well as more about the powerful members of society before we would be ready to read further.  I will be back to this series as I need to know how Jay develops her skill and whether Angel and his unique hairstyle live up to the role of my expectations.  Michelle makes reference to the next book in the series in a recent post on her website.
This is the follow-up to The Hidden City click for my earlier review.
Thanks to Penguin Canada for this review copy.

This sounds very interesting. I like books that create their own societies...I'll have to look for the first one and then this one.

I often finding this with a second book - often they seem to simply pave the way for part three.

A great cover and an interesting sounding book, thanks for the recommendation.