A Gate at the Stairs by Lorrie Moore 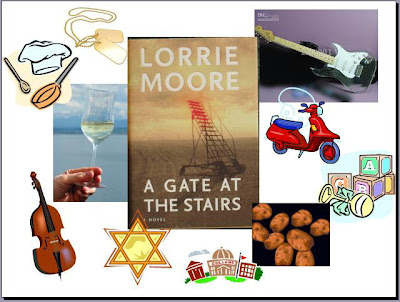 What's one year in your life.  When an average american lives 70 - 80 years, how much impact can the events of one year have on those remaining.  As 20 year old Tassie Keltjin finds out, they can be monumental.

At the beginning of that one year period Tassie starts a part time job as a babysitter for a newly adopted, mixed race baby girl.  Over the following weeks and months, Tassie find herself being totally immersed in another world.  This is one alien to the life she lead at home, which was that of the eldest child of a specialty vegetable farmer in a rural farming community.

At university she takes classes that introduce her to wider aspects of her world; wine tasting, Sufism, the music of war.  A boy friend with an unknown past.  Lots of doors opening and Tassie passes through most of them, even tumbling the occasional time.

As the year progresses these doors start to slam shut.  The first occurs when Tassie returns home for Christmas and finds that her role within the family has changed.  She's not the person she was a few months earlier.  The visit to the first adoption agency seemed promising, but again, the door slammed shut rather quickly.

This book was like a bad roller coaster ride.  It had all the uphill expectations of a big stomach wretching drop, but once you reached the peak, it just kinda coasted gently and didn't seem to go anywhere.  Then another buildup and nothing.  Usually the ride up the hill is exciting as the higher you get the more you see, but in this case there just wasn't much new to see. It stayed the same.  There were lots of bits and pieces added in such as the mashed paperwhite bulbs, the scooter, playing the bird of prey while her father is cutting crops, that I found as distractions. Was I supposed to read more into them with my own reflections. Perhaps they would make more sense if I sat with several  bookclub members and discussed them with a glass of sauvignon blanc as Sarah and Tassie did whenever they had a 'serious' conversation.

This story never seemed to find it's stride. It kept trying, but failed for me.  Sure, the end had a big emotional punch, but that was about it.

This is the fourth book I have read of the six tht have been shortlisted for the 2010 Orange Prize for fiction.  I'm ranking it at the bottom of my stack.

An interesting article about Lorrie and this novel at Ithmus: The Daily Page - "Lorrie Moore at long Last".

A Gate at the Stairs has been shortlisted for :
2010 Orange Prize for Fiction
2010 PEN/Faulkner Award for Fiction

Visit Petty Witter at Pen and Paper for her review.

Les Paul guitar image from DHgate.com
Posted by Heather at 11:41

I'm loving your reading maps! This is on my list to read too. I read "Who Will Run the Frog Hospital" by Moore and remembered liking it - but can't really recall it now (maybe I didn't like it that well!). Good review!

I am sorry it wasn´t a better experience.

This convinces me I should stick to my own book selecting process: I trust reviews by bloggers I know, not anyone´s short lists :D

Yeah that doesn't sound like anything I want to read!

A bad roller coaster ride, what a lovely way to describe the story.