The Lacuna by Barbara Kingsolver 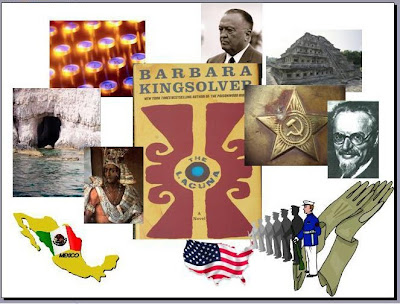 This is the story of fictional Harrison William Shepherd, son of a Mexican mother and an American father.  During his childhood and youth he is influenced by both cultures.  Not quite Mexican ( he is blond and very fair) and not quite American (he is not familiar with their culture and slang).
As a youg boy he begins keeping a journal of daily events and conversations.  At fifteen he finds himself in the household of Mexican muralist Diego Rivera.  While living and working there he mets and spends much time with Soviet dissident Lev Trotsky.
For the first 150 pages of this book I just didn't get it.  The story seemed to be going nowhere and I didn't see any possibility of that changing.  I did keep plugging along figuring that the selection committee for the Orange Prize knew something that I didn't.  It finally started making sense somewhere around page 400.  Harrison is a young man who is influenced by the great men and women surrounding him.  He does make his own choices, but his life is subject to the decisions and actions of others.  When he moves to America the same thing happens.  He settles in his career as an author and that is destroyed by scared men on a witch hunt.  That part I found insightful.  You can do everything right and yet others can mis-construe everything.
The use of American slang in this book was very amusing.  I had no idea what most of it meant and neither did Harrison until it was explained to him.  His mother used to grab onto any new slang and liberally sprinkle it in her conversations.
Even though this book didn't really work for me, I loved learning more about Mexican history and about the American attempts to purge supposed communists from the country in the era of J. Edgar Hoover.  It provides lots of material for a book club discussion.
I am trying a new format. Instead of posting photo of the book cover I have created a 'reading map'.  I learned aobut these from Rachelle at Bibiliobabe.com a few weeks back.  I have chosen to show some of the images that remained in my head  while reading this novel.  Only the cover photo is mine, the rest have been gathered from PowerPoint or from the web.  Let me know what you think about this type of presentation.
Visit Barbara Kingsolver's website to learn about her other books.
Browse Inside The Lacuna.
Shortlisted for the 2010 Orange Prize for Fiction
Petty Witter has posted an excellent review at Pen and Paper.
Peaceful Reader has posted a very favourable review.
Laura has posted her review at The Orange Prize Project.
To learn more about Mexico read my review of The Hummingbird's Daughter by Luis Alberto Urrea.

This is my 7th book for the Read, Remember, Recommend Fiction Challenge hosted by Bibliobabe.  The contest runs till April 2011, lots of time left to enter.
Thanks to HarperCollins for this review copy.
Posted by Heather at 14:38

Love the reading map. I have this one on my to-be-read pile. I heard that others also had a little trouble with this one. It doesn't look to good for me. I'm still going to give it a try in the near future.

Yeah! Your reading map is great...I'm so glad you did that!

Yet to read it myself, Husband dearest is really struggling with it to the point I don't know if I'll even bother trying. Thanks for your thoughts on it.

The reading map is great. Thanks for linking my review!