A Lesson before Dying by Ernest J. Gains 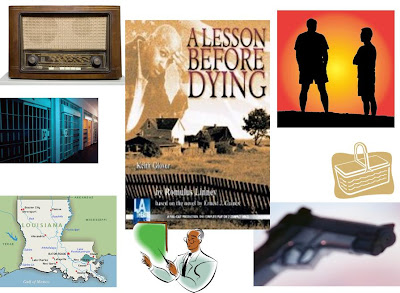 I listened to the audiobook version adapted by Romulus Linney and performed by the L.A. Theatre Works.
This is the story of Jefferson, a youn man living in rural Louisiana about 1948, who has been erroneously convicted of murdering a white shop keeper.  Once his white lawyer has referred to him as a hog, his behaviour reverts to that of an animal.  His Aunt Emma, who raised him, asks the local school teacher, Grant Wiggins, to speak with him and to help Jefferson to regain his humanity and to face his future with dignity befitting a man.
The school teacher has his own challenges.  He hates living in the south, being reminded daily of the poor circumstances of the black man and the mean way in which they are treated. He longs to leave and work elsewhere, but he can't just walk away from the request of Aunt Emma as she was one of the people who helped pay for his college education.
I down loaded this from my library and listened to it on my ipod while driving.  Unfortunately I had it set to shuffle and I listened to the second half of the story first and then the first half.  Yes, I was a bit confused at moments, but it made me listen all that more intently.  I think I might have even gained more listening to it this way.
This was an incredibly moving book.  Yes, it was bad that an innocent man was railroaded into a convictions for a crime where he was a bystander.  For me this book was more about the actual people of Jefferson and Grant Wiggins.  They had the power to chose the type of man they were going to be, the type of man they would present to those surrounding them.  Jefferson could be dragged to the electric chair or he could walk there with his head up and show that he was a better person than those who put him on that path.  He was able to chose to ignore all those who said he was nothing better than an animal.  He lived up to the expectations of his Aunt Emma and to the many others in his community who were supporting him.  Grant asked Jefferson to become a hero to his people.  To walk with his head up.  Even the teacher is able to learn from the student.
I really enjoyed listening to this play and look forward to reading the novel.
Author Ernest J. Gaines has written at least eight  books and many more short stories and articles.  He has won numerous awards for his writing.  The University of Louisiana at Lafayette has a good biography of Mr. Gaines.
A Lesson before Dying has won the following awards:
1993 National Book Critics Circle Award for Fiction
1994 Black Caucus of the American Library Association Literary Awards
Also selected by the National Endowment for the Arts for The Big Read
The cover photo used in the reading map is from the website of the L.A. Theatre Works.

This is my 11th book for the Read, Remember, Recommend Fiction Challenge being hosted by Rachelle at Bibliobabe.com.  The contest runs till April 2011, so there is still ample time for you to join in the fun.
Posted by Heather at 13:50

I love your blog. A Lesson Before Dying is one of my favorite books. Ernest Gaines is a great author. Don't you just love him.?

I read this book about 10 years ago and loved it. I remember crying a lot at the end.

This book has been on my TBR for a very long time. Since you said you had got it from your library, I checked mine and sure enough, I can download the same version. This may have to be my next audiobook.

Great review! This is one of my favorite books - it will stick with you for a long time.

I am loving your reading maps!!!

Caught the made for TV movie a few years ago — bet the book is even better!