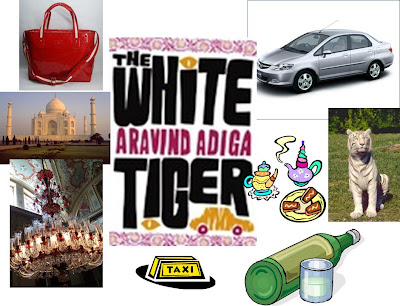 Animals aren't intended to live in zoos, so why is that some people seem to be content to live in their self imposed or society imposed cages.
This is one of the questions that Aravind Adiga poses in his debut novel White Tiger. I listened to the audio book over the past two weeks, and found that I never wanted to press the 'stop' button.  If it had been a paper book, I would have carried it around with me non-stop, peeking pages whenever I had a free moment.  Even now, I am planning to purchase at least one copy.
Balram Halwai was born in a small rural village into a family of the caste of 'sweet makers'.  His father was a rickshaw puller and his brother worked in a teashop.  Balram started out following his brother, though while his brother strictly did his job, he chose to listen to the talk of the patrons and learn more about the world.  He longed for more than cleaning up the slops of others.  Balram decided to become a driver and work his way up in the world.

Balram is telling the story of his life and his rise in status as an entrepreneur in a series of late night letters to the Premier of China, who is schedualed to visit India in the near future.  In his letters he admits to being a wanted murderer and proceeds to explain to the Premier why his earlier actions were warranted.

Mr. Halwai likens his early life to that of a caged animal at the zoo.  His position is that even if you open the door to the cage, the animals will remain inside the bars, that is what they know of life and they expect no more.  It was interesting to see how Balram forced open the doors of his cage and ran out, free.

I'm not sure why, but I was hooked on this book from the first pages.  It is set in a country that I know little about (India), in a series of jobs that I haven't experienced.  I do think that mostly it was the lilting voice of the reader.  Each time I turned on my player, I didn't want to stop, I wanted to keep hearing that voice.

At times Balram Halwai reminded me of Jay Porter the main character from Attica Locke's book Black Water Rising.  Both are men who appear to be free, but both are still living within the shackles of their mind.  Locke's book has  been shortlisted for the Orange Prize for Fiction.
Audio book from Tantor Media, read by John Lee.
Winner of the 2008 Man Booker Prize for Fiction
Honda City image from Pakauto Car
Red bag image from Gucci Italy

This is my 10th book for the Read, Remember, Recommend Fiction challenge hosted by Rachelle at Bibliobabe.com.  There are a number of great prizes to be won, as well as monthly book prizes available to all visitors to her blog.
Posted by Heather at 13:15

Another book that's on my TBR shelf. It sounds so good.

Hi Heather,
Sounds like an intriguing book. I checked out the reading challenge Read, Remember, Recommend. I've ordered the book and hopefully will get it in a few days. Then I will be joining this challenge. It sounds like a good one. Thanks for stopping by. Have a great day!

I've come across your blog, Books and Quilts, and I think it's great. I work for Second Story Press, an independent press dedicated to publishing
feminist-inspired books for adults and young readers. Our list spans adult, children's, and YA - both fiction and non. Here's our website if you'd like to take a look at what we publish:

If you are interested in possibly reviewing our books, I'd be happy to send you a review copy of one of our new titles and our catalogue.

Great map! I loved this book too. The Man Booker Prize always picks ones that are a little on the edge - which makes it one of my favorite prizes.

A couple of the library book clubs in my area are reading this book soon. I'm glad you enjoyed it!

i like this book seemed to sum up the opposite sides of india and was beautiful written ,like your book maps very nice ,i suggest his new book between assasinations equally as good set in earlier time follows a village in indian ,all the best stu