Who Owns the World: The suprirising truth about every piece of land on the Plant by Kevin Cahill with Rob McMahon 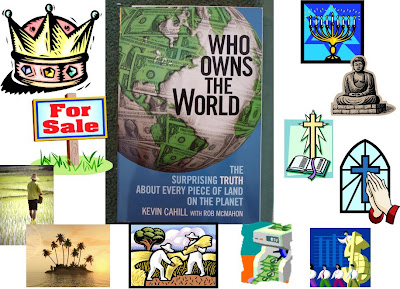 I have found this a hard book to review.  Its not your typical book with pages of prose that you can read along.  That part of the book comprises about 60 pages.  The balance is charts and table of statistics which are not meant to be read in one sitting, rather to be re-visited frequently or when you hear about a country in a book, on a show or in the news.  You can pick up this book and quickly learn more about it.

I have been telling my family and friends about this book over the past months and they have found the basics are rather eye opening.

"Land is the single most common characteristic of wealth worldwide."  According to Mr. Cahill, to own land is to be on the track toward wealth, yet 85% of the worlds population is excluded from owning land (due to lack of money).

Who holds this land is what keeps it from being owned in a more balanced fashion.

Queen Elizabeth is the world's largest land owner.  She owns all the lands of the Commonwealth, 9,000 million acres, of which approximately 6,600 million acres have her name as sole owner  This essentially means that if the Queen wants the land on which my house sits, she can take it.

The Pope rules over all the land owned by the Catholic church, some 177 million acres world wide.  With that much wealth, why are churches in Ontario allowed a tax free status?

The balance of the book is filled with tables and sections for each country.  I opened the book and looked at Pitcairn Islands in the Pacific Ocean midway between Central America and New Zealand.  Population is 44 people, size is 8,772 acres which calculates to 199.4 acres per person.  Approximately half the residents own land.  Big in the news right now is South Africa.  Population 46,430,000 people, area 301,243,520 acres which calculates to 6.5 acres per person.  The country owns all the land and individuals hold land by deed registry (the government does not guarantee title).

The book is filled with fascinating reading.  It is one I will be keeping on hand for frequent referrals.  Where many readers pick up dictionaries to look up new words, I keep my atlas at hand, I'll now be keeping Who Owns the World nearby.

Take a quiz designed for readers of this book

Why write Who Owns the World, comments by Kevin Cahill

Additional information regarding this book can be found at the website: Who Owns the World


Thanks to Hachette Book Group for providing me with this review copy.

Reviews by my fellow bloggers can be found at:
Posted by Heather at 06:00

Hi Heather, this is Clare, Kathleen's mom. Shannon told me about your blog so I've been reading -- it's great! I work in academic publishing but as a volunteer I'm also involved in the Eden Mills Writers' Festival every September. Some time when the girls are hanging out we should talk books. I do keep my own blog as well as the Press blog, but I'm not as regular as I should be.