The Mystery of the Hansom Cab by Fergus Hume 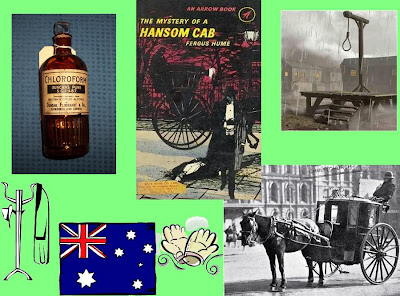 This murder mystery is set in Melbourne, Australia at some point in the late 19th century.  It was the first novel by lawyer Fegus Hume.  After the success of this story he went on to write dozens of other books.
The story starts when the driver of a hansom cab goes to the police station to report a murder.  His last passenger of the night, Oliver White, had been murdered right in the cab.  From the statement of the cabbie, it appears an open and shut case and very quickly a young man is arrested and sent to trial.  That is the last simple thing that happens in this story.  Mr. Hume then leads us along a number of twisting trails, until at last in the final pages the true murderer is revealed.
I downloaded this book from LibriVox (direct link to this book) after reading about it at a fellow blogger's site.  Thanks to Miri at Milk and Honey Quilts for introducing me to LibriVox (general website) and this author.
I will definitely be visiting LibriVox for more audio books in the future.
Photo Credits:
Chloroform bottle - Exposing myth, distortion, corruption and the TRUTH
Hansom Cab - Christchurch City Libraries
Gallows - David Hunter
Posted by Heather at 08:00

hi ,I ve this in my sony touch to read ,love you picture descriptions great ,heard about this on abc's book show must read it soon my self ,all the best stu

Glad you liked the book and Librivox...its one of my favorite places!

Just my cup of tea, I'm adding this to my wish list. Thanks for the recommendation.

This sounds like a good read.
Ann
Cozy In Texas