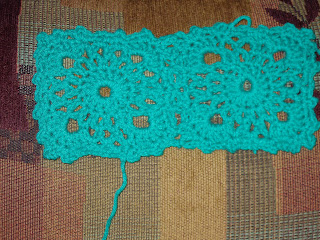 A few weeks back I told you that I needed one more pattern for an afghan.  I thought I had found one that would work for me and decided I had better make up a sample before buying all the supplies.  I tried last night and the first block went well.  Then I tried a second which you attach to the first when you hook the final round.  I didn't like how they went together at all.  eww yuck.  The two blocks are shown above.  I'm not going to be making any more of these.
The pattern  is from Coats and Clark and is called soft squares throw.
I went to their website and found a different pattern Snowflakes Throw that I am going to try out tonight.  The person that I am secretly making it for looked at the picture online and said she likes that one better also.  Now that's a relief.
I'd better go now and get on with testing the new pattern.  Pictures next week.
Posted by Heather at 20:44

My nana used to crochet all manner of wonderful things. Try as she might, I just never learnt myself which I now regret.

I think the square itself is pretty but I also see the problem when they're hooked together.