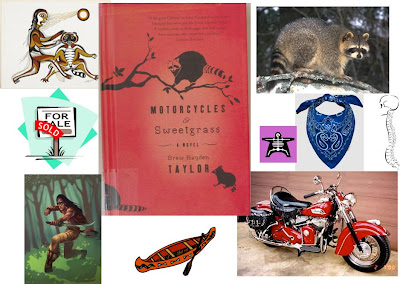 His mother is the band chief, his grandmother, a respected elder, is dying, and he's related to half the members of Otter Lake, Virgil doesn't imagine that life could be any more difficult for an Anishnawbe teenager.  That is, until a shiny red 1953 Indian Chief Motorcycle was driven into town by a mysterious blond haired, blue-eyed white man.  To further complicate matters, this stranger walks right into his grandmother's house and her bedroom as though he was family.

Being a curious teenager, Virgil sneaks a look in his grandmother's window and spies the stranger kissing his grandmother in a surprisingly passionate manner.

Something is afoot in Otter Creek and Virgil is convinced that the motorcycle riding stranger is behind it.  with the help of his Uncle Wayne, a self styled Indian Martial Arts expert, he intends to get to the bottom of it and save his mother and family.

I loved every minute of this book.  I read it while camping, shortly after a brief visit to Curve Lake First Nations, Drew Hayden Taylor's hometown. At first I wanted to learn more about Virigil's grandmother Lillian, but as the story continued, I realized that those very details were mixed in with the stranger's story.  Turns out the stranger is....  Oh shoot, I can't tell you that.  Let's just say that mythology figures large in this story, though it appears in such a way I didn't question it, I just accepted it.

Two scenes remain in my mind: the members of the Otter Lake Debating Society sitting on their porch discussing the events that have happened, and that of Nanabush and his conversation with Jesus.

This book is funny and serious in turns.  Every page kept me wanting more.  Even when I was finished I wanted more.  I for one am hoping that there are more stories coming out of Otter Lake.

The Night Wanderer: A Native Gothic Novel is also set in Otter Lake.

Other books by Drew Hayden Taylor that I've read:

Furious Obersvations of a Blue-Eyed Ojibway: Funny, You Don't Look Like One Two Three

"Nanabush giving the Racoon it's Colours" by Daphne Odjig from Cybermuse
1953 Indian Chief Motorcycle from Indian Motorbikes
Blue Bandana from Woof Creations
Indian Ninga from CGHUB
Posted by Heather at 16:19

Thanks. I've added "Motorcycles and Sweetgrass" to my library request list. We have two of Taylor's non-fiction books here at home: "Me Funny" and "Me Sexy"; they're essay collections that he compiled and edited. Looking forward to trying his debut novel.

I don't normally like books with martial arts and fantasy but this sound like a fun, quirky read.

I agree completely. It was a fun read, with great story and characters. The mythology part was also really well done, and I understand what you meant by 'I just accepted it.'