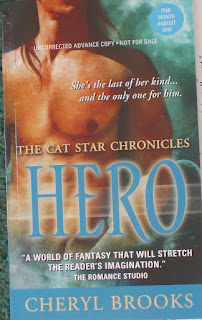 Romance, genocide, revenge, and justice.  All these mixed in with space travel, alien races, and steamy sex.  It just doesn't get any better.  Oh wait, I forgot to throw in the hot men.  Yep, that about does it.

Micayla has never fit in with her classmates, workmates or neighbours.  Considering that she has cat-like eyes, pointed ears and she can purr, it's not surprising.  The last thing her mother did before she was murdered was to give Micayla to a woman in spaceport and ask her to keep her baby safe.  Since that time she has never met another member of her race, what ever that might be. While working as a communications officer on Orleon Station she catches a glimpse of man that she feels compelled to find.  Who could he be and why does she feel she has to risk all to find him.

Trag has been working as a pilot for several years and once again finds himself docking at Orleon Station.  His shipmates have sent him to find "female" companionship even though he has publicly sworn to marry only when he finds a Zetithian female, knowing there are none left in existence.

This was a funny and totally entertaining book.  The love and denial between Micayla and Trag was almost predictable, though I couldn't imagine it happening any other way.  I enjoyed watching both these characters develop and learn more about their earlier lives.  This is the sixth book in the series and while I haven't read any of the earlier ones, Ms. Brooks did a great job of recapping and getting me up to speed with all the main characters especially Trag.

Genocide, revenge and justice play major roles in the second half of the book.  It's amazing the lengths that one man will go to to sooth his bruised ego.  All I have to say to that character is grow up, look to your self for your faults, stop blaming them on others.   As for the Zetithians, they take the highroad and show why I think that in future editions of this story they will have the strength to survive and possibly even thrive in what has until now been a hostile universe.

I look forward to reading more about this race and finding out their earlier history.  Note that this book contains material that is not appropriate for younger readers.

Thanks to Sourcebbooks for this review copy.
Posted by Heather at 16:13

This book cover looked interesting when I saw it the other day. Now reading your review it definitely sounds good... my kind of story :) Thank you for the review.

Sounds like this one has something for everyone but I can't help but think that the author might have crammed in too many characters/strands to the story. Thanks for the review.