Yippee, even with all the interruptions and travel and such, I did get to needlework this past week.  As you can see, I have almost completed the second row of the Snowflake afghan.  Still a millions ends to work in, but I even got a start on them, it just doesn't look like it.  This is a fun project and its moving along nicely. 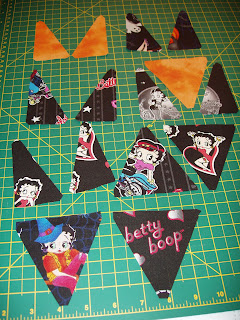 Weeks ago I told you about some Betty Boop fabrics.  They are cut.  Finally.  Ok, the orange has no Bettys but its a great colour none the less.  From each fabric I cut 4 sets of the right angle triangles and 4 of the equilateral trangles.  Will be making some sort of star block unless I can find something more interesting.  These are only a side project.  The main project piece is shown in the next photo.  My mother knows what it is and she tried to post her guess previously but it never showed up, so I am going to leave you further in suspense.  There is one additional piece that is cut but not shown.  It was too boring a shape. 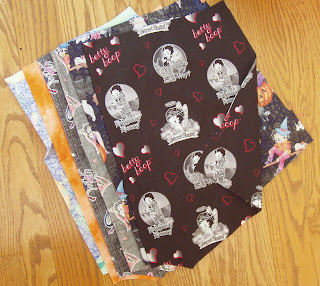 While cottaging this past weekend I showed my niece how to crochet.  She picked it up so fast.  She has already knit two scarves in the month and a half that she's been here (yes, I will post photos eventually) and now she is starting mittens.  Two colour, fairisle style.  First I need to show her how to knit in the round and then how to knit two colour.  Little did she expect to become knitting profficient when she travelled to Canada.  She reassures me that she will be able to wear these items when she returns to New Zealand.  Maybe the scarves, but I think the wool mitts might be too much.
Posted by Heather at 11:18

I like the sound and look of the Cumin Lentils. When I can get to the web page I'll have a go.

The snowflake afghan is looking good. It is very affective pattern with the colours you have chosen. Orange is a great colour as goes well with the Betty Boop fabric.