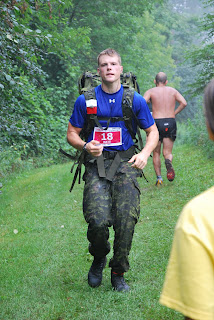 This past week I had the honour of witnessing Corporal Nate Malton, a reservist with the Royal Highland Fusiliers, successfully complete a series of running races totalling 160 kilometres all while carrying his backpack filled with 40 pounds of gear.
He was doing this as a fundraiser for  Wounded Warriors.ca.
Further details on Nate's run are available at the Wounded Warrior site along with information on how to donate to this worthy cause. 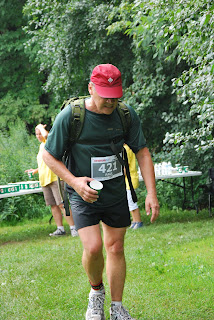 The first picture shows Nate on  Tuesday, August 10.  That day was a 30 k hill race at Bechtel Park in Waterloo.  For this stage he was joined by Major Paul Hale. 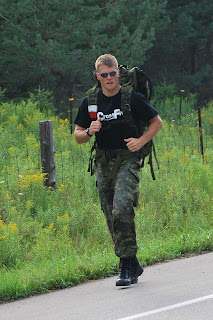 On Wednesday evening Nate ran a 16k hill race in Heidleberg, Ontario.  This area, just west of Waterloo offers a number of fairly extreme hills that are the site of many foot and bike races.  This fourth picture, taken about one minute before the finish line does no justice to the steepness of the hill. 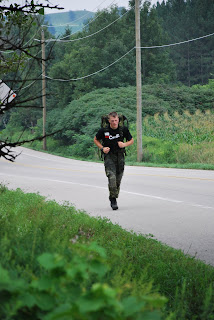 The final day of racing was Sunday, August 15.  This was the marathon, 42.2 k in hot, humid weather.  The race started in my neighbourhood of Conestogo, proceeded to Kitchener along a meandering country route, then into Waterloo in the RIM Park area and finally a few more hills brought you back to the start in Conestogo.  Now repeat for the full distance.

For this stage Nate was accompanied by Vincent Lacharite (also carrying a full pack)  and on the second lap, Paul joined in once again. Waiting for him at the finish line were three miltary pipers and a growing crowd of well wishers.  Nate and Vincent crossed the finish line with an identical time. 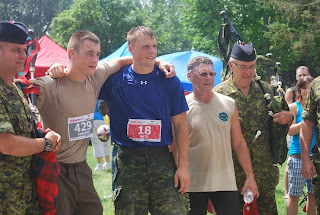 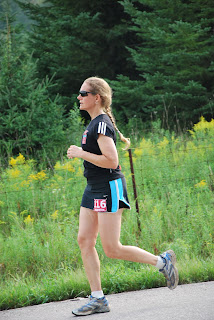 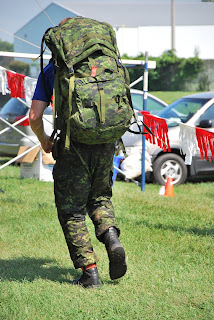 Yes, it was truly inspiring to watch Nate cross the finish line. I ran the marathon and it was hard race, even without the full attire and pack! There were more than a few teary eyes in the supporters.
S. Halkett