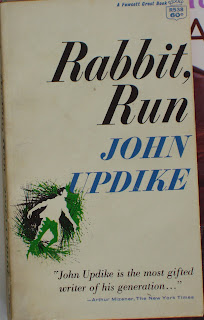 This is the story of Harry 'Rabbit' Angstrom.  Even though he is married and his wife is expecting their second child, he has not settled into adult life.  He still relives his success at highschool basketball and is trying to figure his place in life.  Not knowing what else to do, he run, he runs from the kids on the street, he runs from his job, he even runs from his wife and child.

I didn't like Harry. How could I, he ran away from his pregnant wife without a look back and then hooked up with another woman who he refused to let use birth control.  Eeks.  It made me want to run away from him.

This book is filled with imagery.

The story is set in the neighbouring towns of Mt Judge and Bower.  They would have been one town with the exception of Mt Judge splitting the two.  Rabbit lives with his wife in Mt Judge and with his mistress on the other side.  This separation of the two groups of people in his life shows up frequently.  It is a long and diffucult walk from Bower to Mt Judge, when Rabbit choses to undertake it.

Running, always running, whether it's a physical activity or a mental one.  Rabbit is never where he thinks he wants to be or where he thinks he should be.  He runs away from his wife, from responsibility and from making a commitment to God, or Ruth or even his new job.

The other image that stuck with me throughout was that of Rev. Eccles always wanting/needing a fresh cold cup of water.  While he says that he likes Harry and that he feels he's a good man, to me this drinking of water could represent washing away what he finds distasteful.

This is a short book of 255 pages, yet it took me over two weeks to read.  It failed to capture my attention.  I kept plugging at it optimistic that it would get me; it didn't happen.  There are several follow-up books to this: Rabbit Redux, Rabbit is Rich, Rabbit at Rest and the novella Rabbit is Remembered.  Will I read any of these.  If they happen into my hand, curiousity of whether Rabbit ever gets his act together might drive me to start reading....

The video is a book trailer that was made for Rabbit, Run by IM McClerin.

This is my 13th book for the Read, Remember, Recommend Fiction Challenge hosted by Bibliobabe.
Posted by Heather at 17:56

I ve read all the rabbit books updike is probably the best chronicler of america post world war two and in rabbit has held up a prism to middle class america ,all the best stu

I know this one is supposed to be brilliant, but I think I would feel exactly the same way that you did. I don´t have much patience with people who should be grown up but behave like irresponsible children.

Possibly the reason that I so dislike Rabbit is because the author was so successful in creating him. Using only the written word he created a man that I could so dislike without making him appear to me as a beast or homicidal maniac. This will bare further thought and discussion with my sister once she reads my copy of the book.
Thanks to Dorte and Stujallen for their comments.

I read this years ago and had very mixed feelings. I went on read Rabbit Redux which I really hated and I haven't read any John Updike since.