It was a gorgeous day on Sunday.  Sunny with the occasional cloud which made it difficult to take photos.  Since the authors wanted to be able to see the words on the the pages of their books, many of them wore sunglasses.  I tried best I could with my photos, but I am definitely an amateur.  Hope you enjoy them anyways.

As I mentioned previously, there were several venues with authors reading at the same time, so I couldn't possibly listen in on all of them.  Mostly I stuck with my daughter and went where she wanted.  YA authors, and they were fantastic.  I wanted to rush out and buy a whole stack of books, unfortunately reality reared it head....
Richard Scarsbrook 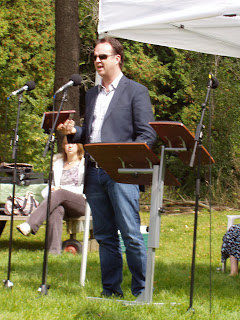 most recent novel: The Monkeyface Chronicles
Mr. Scarsbrook read from a chapter titled "The Meaning of No".  That passage is one in which the bullied characters turn the tables on the bullies and 'get them back'.  Excellent.  I love the character names in this book.  They are so imaginative and will greatly appeal to the teen reader.
At the conclusion of his reading, he related a tale concerning a chapter of this book.  He had wanted to include a chapter that contained a hint of some big event yet to occur.  Just before sending the manuscript off to his publisher he decided to delete the chapter.  Of course when his publisher replied to him about the book, he liked everything but made the suggestion that he include a chapter that would hint at something important that would be happening later in the story.  The audience loved this reminiscence.
Tom Henighan
writes both YA and adult novels
most recent YA novel: Doom Lake Holiday 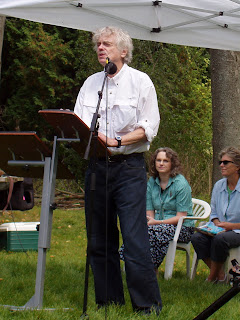 Mythology finds it's way into most of Mr. Henighan's YA novels.  When asked why he writes YA, he replied that he has a passion to do so, and that as a child he loved reading, was always looking forward to what would happen on the next page.  He says that he writes for himself, to re-live events and experiences from his life.  Most of his books are about boys who don't have a good relationship with their fathers.  The aim being for reconciliation.
He then read a passage from Doom Lake Holiday  that was of a scary dream sequence that occurred after the main character awoke at the most dire time of 3am. Along with the rest of the audience, I was in rapt attention and needed to hear more, but then his time was up and Richard was finished his reading.
R. J. Anderson 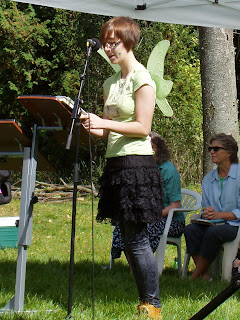 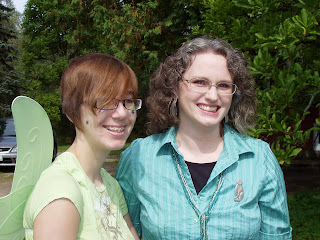 My daughter was thrilled to introduce R. J..  In fact, she was so excited that she even got into character and dressed as the faery Thorn. 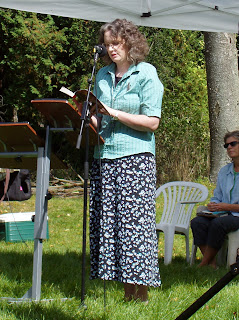 most recent novel: Wayfarer
R. J. walked up to the microphone and immediately started reading from the opening chapter of Wayfarer.  She was reading so enthusiastically that the audience was carried along the story for the next ten minutes and was left practically begging for more.  For the final minutes she read a passage from further in the book when we meet Timothy, one of the human characters.
Read my earlier post of meeting R. J. at the Turning Pages A Literary Festival.
Marthe Jocelyn 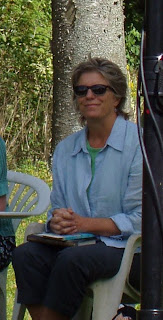 most recent YA novel: Would You
most recent children's book: Which Way
Inspired by family stories, Marthe wrote the YA novel Would You.  This book takes it's name from the kids/teen challenge game where one player asks the next "Would you rather ...?" and then names two difficult choices which the other player must chose from.
She then read from the prologue of her earlier work Mable Riley, a character which is based on diaries found in her grandmother's attic.
I was so engrossed in what Marthe was saying/reading, that I forgot to take a picture of her but was able to crop this pic from the background of and earlier author.  Sorry Marthe.
Drew Hayden Taylor 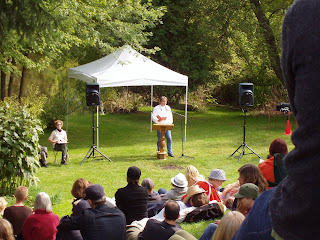 most recent book: Motorcycles and Sweetgrass
I know that you can hardly see Drew in this picture but this was such a nice venue that I wanted to give you a view of this nature amphitheatre.  Next photo, I have cropped so you can actually see him. 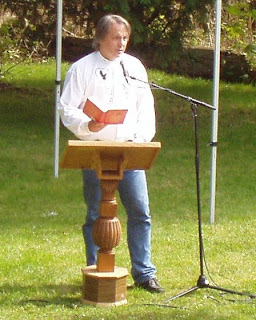 I arrived late for this reading and missed Mr. Taylor's opening remarks.  He read from the opening chapters of his newest book Motorcycles and Sweetgrass, followed by the very funny chapter that introduces 'the racoons' and the Otter Lake Debating Society.  For further information regarding this book, read my earlier review.
﻿Dede Crane 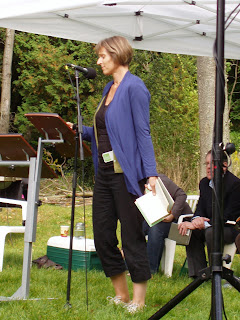 most recent book: Poster Boy
themes: carcinogens, appreciation of the world the way it already is.
The main character is 16 year old Gray.  Dede found it a challenge to write in the first person, firstly as a boy and then as a teen.  From the passage that she read to the audience, I felt that she was very successfull.  OK, What is it with the Chuck Norris jokes?
John Ibbitson
most recent novel: The Landing 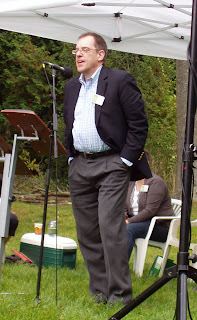 This book is set in the Muskokas where John grew up.  He told us that he always wanted to set a book there.  Years ago, while sitting in a bar in Manhattan he conceived of the idea but that it was years before he did anything further with it..  The main character is Ben Mercer, who is 15, and the book is set during the Depression.
He then made an interesting comment on his thoughts of writing.  That when you are writing a book you're not really writing it, that you're listening very carefully to what your character have to say.
He then read a passage from when Ben was 4 and went  with his parent to listen to an orchestra.  The descriptions that were used made it feel as though I was there with him that very first time and listening and exploring  along with him.
Erin Bow
most recent book: Plain Kate 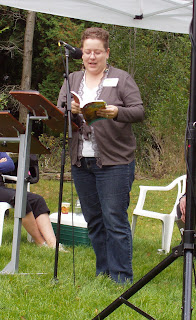 Erin told us that this was the first reading of this book that she had done for non-professionals (ie: librarians and such).  The book  is  filled with magic and witches.  There is a great interview with Erin by Mandy at Edge of Seventeen blog.

Amy at Amy Reads has posted her review of Plain Kate.
Darla at Books & Other Thoughts loved this book.
﻿
Shane Peacock
most recent book: The Boy Sherlock Holmes: The Secret Fiend 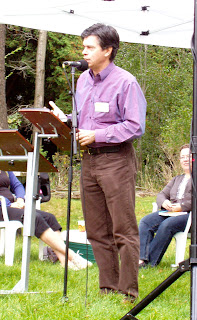 Mr. Peacock is a man of many talents.  He confided that he has actually learned many of the skills that his character undertake in the course of his books.  While he has learned tight rope walking and sumo wrestling, he declined to demonstrate for us.  His Boy Sherlock Holmes series is set in Victorian England during the time of Jack the Ripper.  Instead of reading from his most recent book, he read from Eye of the Crow, the first in that series.  Shane read a passage of how the young Sherlock became involved in solving his first mystery.  Sherlock was just on the verge of a discovery when the author snapped the book closed and left us hanging.  Oh great, another book series to add to my rapidly growing wish list.
Giles Blunt 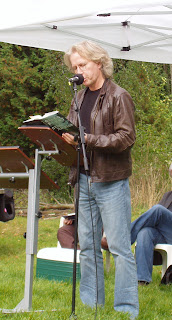 ﻿Mr. Giles read from the opening pages, a passage where a yet unknown man falls through the ice at a crime scene.  Turns out to be FBI agent Mendalson.  The description of the ice and his saving is terrific.  Even though it was sunny and warm outside, I could almost imagine that I was there.  I really need to get caught up on this series so I can read further and find out how this case goes.
Linwood Barclay
most recent novel: Never Look Away 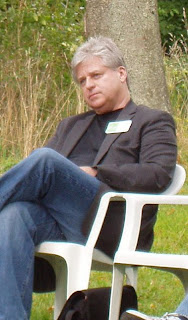 Mr. Barclay started out by telling us that he had been advised many times, that when doing a reading you should never read from an upcoming book.  That you must read from something that the listeners can purchase right away.  So he followed this advice and read from Never Look Away.  I will quote exactly what he read:  "I'm scared. Ethan said."  Then he quickly snapped the book shut and continued to inform us that he would instead read the prologue of his upcoming book The Accident.  After hearing those next passages I wanted to run to my bookstore and put in my pre-order.
Peter Robinson
most recent book: Bad Boy (19th book in the Inspector Banks series) 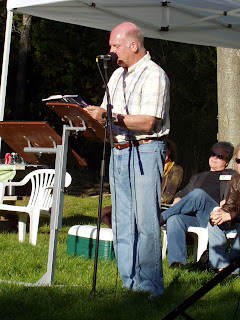 This book occurs over the course of two or three days.  It mostly focuses on Banks' daughter Tracy.  I would tell you more about this book, but I was so captived by the story, that I totally forgot to make any notes.  I am amazed that I haven't read any of Mr. Robinson's books.  I have added Gallows View, the first Inspector Banks book to my 'soon to be read' list.
I hope that you have enjoyed my photos and comments of the authors that I listened to during the course of the day.  Some are fantastic readers, others not so, but one thing they all have in common is that they are terrific writers.  I look forward to reading many of their books in the coming months.
For additional photos of the day, visit the Eden Mills Writer's Festival Facebook page and click on Photos.
Please leave a comment with your favourite books by any or all of these authors.  I'd love suggestions of which of there other books you enjoyed.
Posted by Heather at 22:23

Well! That explains the wings.

I really enjoyed this post and the earlier one...felt like I was there. What a great Festival.

Splendid post. It must have been a fantastic event.

My favourite bit was this:
"Just before sending the manuscript off to his publisher he decided to delete the chapter. Of course when his publisher replied to him about the book, he liked everything but made the suggestion that he include a chapter that would hint at something important that would be happening later in the story."

I think it is very encouraging for someone like me to see that ´real´ writers also struggle with that part of it: what should I delete, what should I keep, when they revise their manuscripts.

Great post about the festival! I've never been to this one but I hope to go next year. My daughter and I love Shane Peacock's Boy Sherlock series, and we've both had the pleasure of meeting him.