Needlework Tuesday - No, not new projects 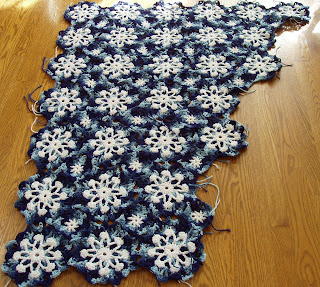 I am so happy.  I was able to get quite a bit accomplished on the snowflake afghan this week.  Across the top I have six motifs and in the length is seven motifs.  I have all the remaining large motifs completed up to the white snowflake part.  I do seem to be running out of the blue varigated yarn, so will have to purchase another ball.  Won't be long before I have to work again at hiding those million ends.  Oh well, all part of the project.

As I told you, I cleared out my sewing room to turn it into a bedroom for my niece.  While doing that I came across heaps of 'trimmings' from previous quilt projects.  They all are now stashed into one of three boxes.  This week I started cutting these up.  Well, that led to a wee bit of sewing to see how things might look if they were turned into a quilt. 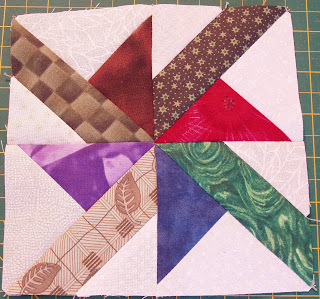 I started with my Marti Michell templates and cut, cut, cut.  Using Marti's Encyclopedia of Patchwork Blocks: Volume 2, I cut and pieced this "Wheels" block.  The diagonal vanes are all green even though they don't look that colour.  I really like the block, but it's only 6" and will take ages to make them.  I am going to keep cutting, but I might turn it into a kit for my mom.  Wall hanging size I think, or add in plain setting squares and it will grow quicker. 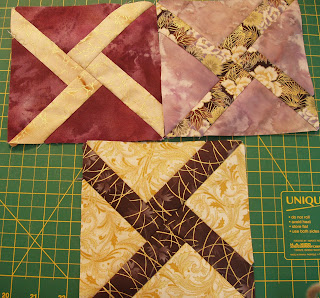 ﻿Next I moved on to some oriental fabric strips I had left from another project. That was a Bento Box quilt.  I chose the pattern "Attic Fans" and cut away.  I pieced these three blocks to see how it looks.  I rather like the effect.  Will probably make 9 of these 6" blocks and make a nice wallhanging. 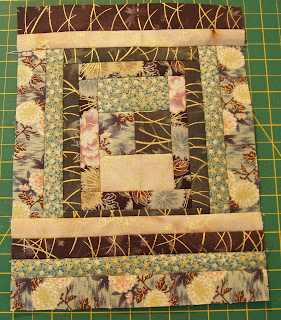 From the oriental fabrics that were too small for the "Attic Fans" I cut them into strips and started piecing log cabin style.  This one block measures about 6 1/2 x 9".  I am going to try and find a gold tone metal buckle/pendent and stitch that on and turn it into a small wallhanging.  Both these will look good in the room that I am going to use the quilt in once it's finished. Someday.  Perfect size to fill that small little wall beside a door or window.
Years ago I started a 'Stack and Whack'.  Even attended a class so I could learn proper techniques.  I got the top sewn and that was it.  Beyond my abilities to quilt it at that point.  It hasn't seen light of day in years.  So pretty. what a shame.  I came across the ends of the strips from that project and they happened to be large enough to cut using the templates. 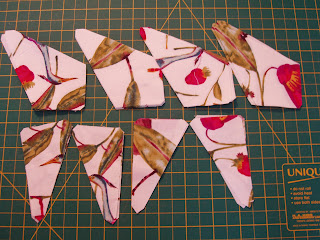 There are 4 sets of 4 of the weird kite shape, so four  6" block.  There are also 24 of the peaky sets shown.  I have ordered some fabrics to use for the missing triangles and sashing/boarders. Hope to show you that next week.  Again, another wallhanging that will go with the original quilt.  Someday.  Next photo shows how the four kite shapes will go together. 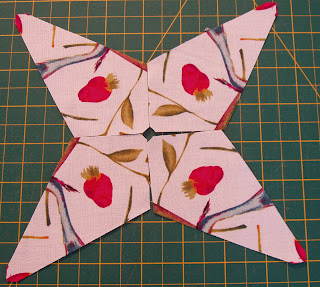 I was listening to an audio book while cutting.  I did help the time pass more quickly.  I wish I had picked a more lively book.  I am listening to Moby Dick by Herman Melville.  It is very long , 23 hours, and the fellow is rather verbose.  I can't keep track of how many times I've lost track of the story.  I don't back track as I figure I'll get caught up at some point and figure out what's going on.
I also attended a knitting show in Kitchener on the weekend.  I managed to keep my purchases down to supplies for two projects.  yippee.  Well, I did buy some patterns as well.  These will be revealed when I actually start working on one of them.
Posted by Heather at 11:50

Your snowflake is coming along great! You will be finished in no time. It is soooo pretty.

I agree - the snowflakes look great!

Oh, that afghan is gorgeous! And yeah, those loose ends are such a pain. Do you listen to audio books when you do it? I like that for the tedious stuff when I don't have to think.