Word on the Street - Kitchener, Ontario

Word on the Street is a book lovers wonderland.  This weekend venues were held in a number of cities across Canada.  I was fortunate that one site, Kitchener is a very short drive for me.
I was mostly attracted to the readings by authors Louise Penny and Terry Fallis.
Louise Penny 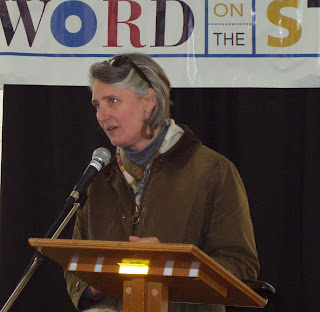 most recent novel: Bury Your Dead
Prior to reading from her newest novel, the sixth in the series, Louise related a story of when she finished writing her first book.  Being  excited, she wanted to share the great news.  She went to her local book store and told the sales lady that she had finished her first book.  The clerk then congratulated her and then asked if she wanted to purchase another book.
\
Her books are set in the picturesque location of Three Pines, in rural Quebec.  Louise says that she created this town as her 'safe place'.  Problem with this is that aside from a character being murdered there, that would mean that there would also be a murderer in town.  To stop the town from being totally de-populated she decided that every other book would have any murder occur out of town.  Thank goodness, I liked Three Pines when I first met it in Still Life.
Ms. Penny then told us a bit about her thoughts on her readers.  She doesn't spoon feed them.  She lets them work out the unwritten details.  The reader is smart enough to fill in the bloody/gory details of a murder, and likewise they know that the characters in the books have sex  without being specifically told.  I like it that an author is giving me credit for filling in the blanks of the characters that I have been getting to know.
Louise's most recent book, Bury Your Dead is sent in Quebec City, Quebec and has Chief Inspector Gamache visiting world famous sites such as the Chateau Frontenac and the Plains of Abraham.
Terry Fallis
most recent novel: The High Road
This photo was taken moments before Mr. Fallis took to the podium. 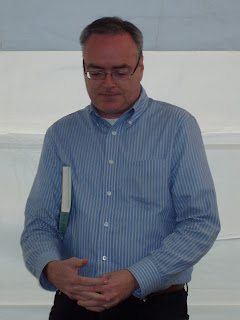 It seems that we were quite lucky to have Mr. Fallis as one of the speakers that day.  He has been on a whirlwind of speaking engagements and family commitments.  Last week he had several readings in Waterloo County as his book The Best Laid Plans had been selected as their One Book One Community read.  Just that morning he had been in Tampa, Florida for a family event and had flown back to meet with us, and then was immediately on his way to Toronto, Ontario so that he could read at the "Word on the Street" event there.  With all the adulation of the past week, you could safely say that Mr. Fallis is our own literary rock star.
After a few introductory comments to set the scene, Terry read us a passage from chapter six where Angus has decided to run again for parliament and he is in 'make-up' and the stylists are attempting to deal with his most unruly hair.  By the end of the first sentence, he had the audience roaring with laughter.  I thought some of them were going to split their sides.  The description of Angus's hair escaping it's lacquered confines almost had me in tears of laughter.  I am looking forward to reading and laughing my way through this newest book.
Read my review of his first book The Best Laid Plans.

Paulina and Kate from Two Canadian Readers were also at this Festival, you can click here to read their comments.

Read what Amy from Amy Reads had to say about Word on the Street Halifax.
Posted by Heather at 22:21

Sounds like a wonderful event, how lucky that you lived so close to one of the venues.

Word on The Street is fabulous! I was at the Toronto one again this year, both volunteering at a booth for a non-profit and wandering around! Glad you had a great time at the Kitchener one!

I was fun seeing you there, my friend!

oops, Thanks Audrey, I have made that correction in my post.

Hey, to answer your comment on my blog, you should check out the Toronto WOTS. I haven't been to any others but to me, the diversity of it is what makes it amazing. There is something for everyone and I mean everyone!