Mailbox Monday was created by Marcia of The Printed Page and is now on tour. Avis of She Reads and Reads is hosting for the month of October.  This will be my first time joining in the fun.  The picture above is a row from a quilt that I started ages ago.  The mailbox will eventually have some tiny parcels sticking out.

My mailbox has been a happy place lately; one book Friday and two today. 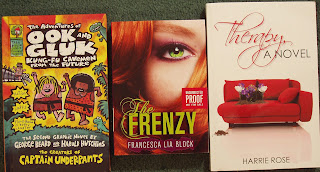 The Adventures of Ook and Gluk: Kung-Fu Cavemen from the Future by George Beard and Harold Hutchins.  I won this in a contest hosted  by Mel at He Followed Me Home and sponsored by Scholastic.

from the back cover: Suckas Beware!!! Meet Ook and Gluk, the coolest caveboys to step out of the Stone Age!  It's 500,001 BC, and Ook and Gluk's happy hometown of Caveland, Ohio, is under attack.  The world's most evil corporation from the future has invaded the past, and the boys and their little dinosaur pal, Lily, are in big trouble!  When a mysterious time portal takes them to the year 2222, they find a wise new friend.  But will they find the secret to saving the day?

The Frenzy by Francesca Lia Block.  I won this in a contest hosted by author Claudia Gray.


from the back cover: Love is a werewolf, influenced by the moon and terror, and always about to change.  Something terrifying happened to Liv when she was thirteen.  Something that changed everything, that made her...different.  Now the only time she truly feels like herself is when she's with her boyfriend, Corey, and in the woods that surround her town.  But danger lurks in the woods, too-and secrets Liv cannot begin to imagine.

Therapy: A Novel by Harrie Rose.  I won this in a contest sponsored by Nurture Your Books.


from the back cover:  Written in a vivid first-person narrative that sweeps the reader along, this bold novel introduces Barbara, a 52-year-old woman who has it all. So why is she sunk in an abyss of depression? Her therapist, 17 years her junior, reawakens feelings she thought she’d never again have. Does he share those feelings or is her merely doing therapy? As he embarks on an incredible journey of self-awareness, uncovering lies she lived by, Barbara’s world opens up like the flowers she enjoys looking after in her garden. Caught up in a revealing, wonderfully feminine embrace, this faux memoir hits a chord with anyone who wonders if life has anything more t o give once your hair needs its monthly dose of colour and gravity takes its toll on your body. It’s not just a novel about getting old. Nor is it just a novel about women. Its theme is the universal one of how we see ourselves and what will bring us real happiness.

Love the quilt, and welcome to the party!

Therapy sounds interesting. I look forward to your review. Enjoy your books!

That's a beautiful quilt! Welcome to Mailbox Mondays -- I hope you enjoy your books!