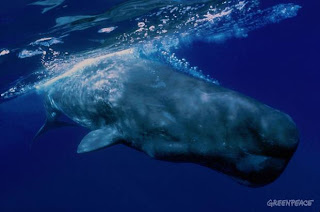 First published in 1851, Moby Dick is still finding it's way on to recommended reading lists.   If you are like I was, you haven't read the book but have seen bits of cartoons and perhaps a movie on tv and think that it's the story of Captain Ahab and his quest to kill the white sperm whale Moby Dick.  Well, in part it is, but it's so much more.  It is practically an encyclopedia of whale lore such as it was known in the mid nineteenth century.

At first I was confused and wondering why Mr. Melville always seemed to be going off on a tangent and losing the thread of the story.  Actually, as it turns out, all those tangents are the story.  The whale himself, is only a part of the larger picture.  One section goes on at length on the taxonomy of whales.  While it was somewhat interesting, after ten or fifteen minutes I was starting to lose track of what was going on and how it could possibly pertain to catching that one, white whale.   After speaking with a literature student, I learned that this book had been written chapter by chapter and was printed in a weekly paper.  Mr. Melville would have been paid by the page, so it was in his best interest to be wordy.  I don't know if this is true, but that would explain some of the choices of what to include in the book.

There were a few passages that I particularly enjoyed.  One of them, chapter 85 discusses the purpose of the blow hole.  Considering that this book was written 150 years ago, I felt that the author presented quite detailed information.    This was  a very lengthy audio book (some 23 hours) and much of it was rather a blur to me.  It perked up considerably at the start of hour 22.  This moving passage was set the night before the white whale was spotted and the final chase begun and Captain Ahab is on the deck with his first mate.  He actually questions whether it is crazy to expend so much effort to capture one whale and whether he should have been spending his time at home with his wife and child.  Very insightful.  From this passage on, I had finally found the book that I had sought to read.  It was exciting and had me hanging on the edge of my seat (so to speak).

Would I recommend this book to other readers.  For a young reader, no way.  Get him or her the new graphic novel that coming out,  or a short abridged one.  This version would seem like punishment.  If  you are a purist and like lots of detail, then yes, this could be the book for you.  Don't expect to push on through it in a few days, you'll need the time to digest the many different topics that Mr. Melville discusses.  If you plan to read the original text, then be sure to visit the Life and Works of Herman Melville website.  They have lots of background information there that will help you get the most out of your reading time. (link is posted below).

I listened to the un-abridged audio version of this book.  Read by Adams Morgan and recorded by Blackstone Audio in 2000.  This version does not appear in there current  product catalogue.

This is my fifteenth book that I have read for the Read, Remember, Recommend Challenge being hosted by Bibliobabe.  There is still time to join in the reading fun.
Posted by Heather at 22:10

In fact both my daughters have read a number of classics without ever complaining, but they have not been able to get through Moby Dick and to be honest, I have never tried.

Kudos to you! I don't think I could get through Moby Dick even as an audiobook.
I remember reading Billy Budd in school and that's enough Melville for me.

Wow...great review! I've never read the book either (bad reader, I know..) but from the sound of it, um, yeah...too many details can put the imagination to sleep, or at least mine...though the reason for it's length could definitely be a driving force behind all of that. (interesting point!) I will definitely conquer it one but can't say that I see this "white whale" in my immediate future. Thanks for the reminder about this classic work! happy reading...

I read MD this year. Parts of it seemed like a textbook on whale anatomy! Occasionally Melville made these really profound observations. Like when he remarked on how the use of whale oil was feeding the whaled hunting. It seemed a commetary on humans overuse of resources and our ignorance as to what goes into turning on a light (as whale oil was used for lamps). It is a comment that still holds true today but we are just using different resources.