Unbound: A True Story of War, Love, and Survival by Dean King 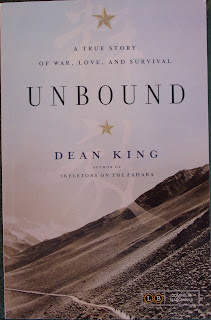 Step by step, one day at a time, the Red Army marched west and north  4000 miles across the breadth of China.  It was October 1934 and the Communist Red Army pulled up stakes in Jingxi province to flee the advancing Nationalist forces.

Prior to reading this book I knew almost nothing about the early twentieth century history of China.  Mr. King includes a section on the rise of the Communist party and details on the role of women in Chinese society of that time.  Women were treated as slaves, farm labour and when of age to marry as a source of male offspring.  They were also subject to the debilitating practice of foot binding.  In 1928 at the Sixth Chinese Communist Party Congress  the potential of women within society was 'embraced' by the party.  They realized that women were a vast untapped resource. That they were capable of being educated and carrying out the same roles as men.

As the communist members moved through out the country side, many women saw the opportunity to lead the lives that they have envisioned for themselves and they immediately enlisted.  A core group of thirty of these women fled with 86 000 men of the Red Army.  They played key rolls in organizing the medical core (carrying stretchers, caring for the wounded), obtaining supplies, recruiting, etc.  At least several of these women had bound feet and spent many agonizing months letting their feet out with the hope they would heal and they would be better able to keep up with their comrades.

I was fascinated by this book.  At first I found it difficult to follow as there were so many place names and people name that were unfamiliar to me that it was hard to keep it all straight in my mind.  After a while it did get easier as I recognized the individuals and worked out the pronunciations.  They story it's self is very clearly written and easy to follow.  The hardships that all the marchers endured was not so easy.  I shivered as I read the passages where the scantily clothed soldiers climbed over sky-high mountains.  When they huddled together under tattered blankets during driving rain and hail storms.  I cringed when the women clawed through manure to pick out the undigested grains so they would have something to eat.

There is so much fact packed into this book that it took me quite a while to read, about three weeks in fact.  I don't begrudge a minute of that time.  I learned a lot about courage and fortitude.  Many of the women could have elected to stay behind at any time.  Many were even offered that choice.  It appears to me that it was a better choice to stay with the army and it's hardships than it was to return to their homes where many of them were treated worse than slaves.

I highly recommend this book for any with an interest in history or in women's liberation.  While it is a long and fact filled book, it is well worth the effort.

Dean King's website.  Be sure to watch the video trailer of the book.

Thank-you to Hachette Book Group for my review copy.

Notable reviews:
The Black Sheep Dances
Posted by Heather at 13:43

This sounds like a really fascinating and informative read. I'm glad to hear that it was not only full of information, but also easy and fun to read.

This sounds so interesting. My knowledge too is almost zero so it would be a good book to read.

It sounds like one of those books where you read a little then have to set it down and process what you read.

Sounds like a promising read, thanks for recommending it. I notice that there are a lot of books about China and Japan around at the moment. I've just finished reading Shaghai Girls by Lisa See.