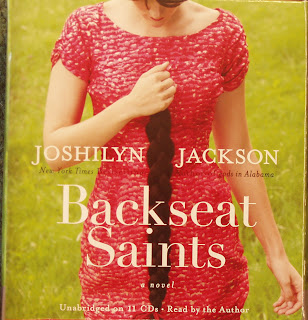 It did all of the above to me and more.  It also made me determined to speak out and not let another friend suffer at the tongue and hands of an abusive husband.

Joshilyn Jackson has written  a strong message in this book.  You can sit back and let it wash over you and say that it doesn't affect you, or you can listen and then act.  Talk to your children who are old enough and let them know that it is never right to abuse another person.  Don't be tolerant, ever.

I want to say I really enjoyed this book, but it was so difficult to listen to parts of it.  Joshilyn was the reader and author and she did a terrific job.  At first I found her southern accent hard to listen to, but after a while it seemed perfect for the story and I got to rather enjoy getting in the car and popping in the next disk.

This book is about more than spousal abuse.  It is also about truth and being open to hearing it.  Both Rose Mae and her mother don't want to face the truths in their life and they run away from it.  Once they do listen with both their ears and their hearts they can begin to heal.

This would be a good bookclub choice, though perhaps not for men.  I tried to relate bits of this book to my hubby but he didn't want to hear.  My son listened to bits, though he's not a big fiction person, so he didn't want to listen for too long.

I was fortunate to win this in a contest hosted by Teddy Rose at So Many Precious Books, So Little Time and sponsored by Hachette Audio.

For a review of the book, read what Teddy Rose had to say.
Posted by Heather at 14:27

I'm glad that you liked it as well. It was hard to listen to at times. Sometimes I wanted to slap Roe for not leaving him and then thinking a different man would save her. However, that's part of the pattern of abuse and why women take it. They don't think they can take care of themselves.

I like the cover of the book. It is almost an optical illusion. As I was scrolling down on my cell phone the ponytail that she is holding gets bigger and kind of seems like a scar or something rather than hair.