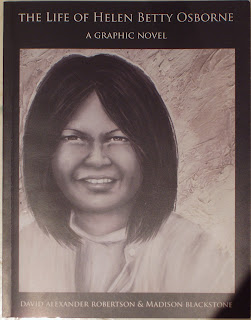 Thirty-nine years ago today, nineteen year old Helen Betty Osborne was brutally murdered  in The Pas, Manitoba by four men.  She had planned to be a teacher so that other youth wouldn't have to leave their families and homes to get an education.

Author David Alexander Robertson and Artist Madison Blackstone have employed the format of a graphic novel to make this tragic story more accessible to teachers and their students.  A teaching guide is available from Portage and Main Press.

There is no good reason why Helen shouldn't be alive today.  In 1988 the Aboriginal Justice Inquiry was convened to examine what happened and why.  Their conclusion:


It is clear that Betty Osborne would not have been killed if she had not been Aboriginal.  The four men who took her to her death from the streets of The Pas that night had gone looking for an Aboriginal girl with whom to "party."

They found Betty Osborne.
When she refused to party she was driven out of town and murdered.  Those who abducted her showed a total lack of regard for her person or her rights as an individual.  Those who stood by while the physical assault took place, while sexual advances were made and while she was being beaten to death showed their own racism, sexism and indifference.  Those who knew the story and remained silent must share their guilt.

While this is a short graphic novel, it's impact on me was huge.  As a woman and as a mother I find it very chilling that another person could chose the final course of my life for me.
This book is not just for our kids, it contains messages for all readers.  The roots of racism, sexism and indifference are not found within our children; they are passed down from earlier generations.
I'm glad I searched out and ordered  this book.  I know that it's message is still needed each time I hear others laugh at racist and sexist jokes.
The Helen Betty Osborne Memorial Foundation provides assistance to to Aboriginal persons enrolled in post-secondary education.
Posted by Heather at 08:00

Sounds like a very important book...what a tragic story.