The Murder Room by Michael Capuzzo 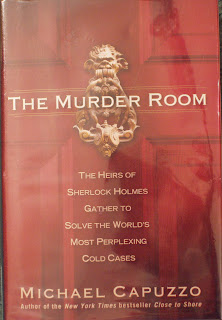 While the various police forces around the world do an incredible job of solving murders, there are those where the perpetrator eludes them for whatever reason.  These cold cases weighed heavily on the minds of William L. Fleisher, Richard Walter, and Frank Bender.  Not only did they want to see justice done, but they also wanted to bring closure to the survivors.

They brought together a group of the best detectives and forensic scientists on the planet and formed The Vidocq Society.  Eugene Francois Vidocq was the founder of the first state investigative agency in France in 1811.  He solved those cases that the regular police had not been able to.

I read a review of this book on one of the major bookseller sites.  It stated that this was a horrible, gruesome book that was all about serial murderers.  Wrong.  Yes there are some descriptions of murders, but the gist of the book is about those people who help to solve those murders.  The author couldn't have portrayed these people so completely without discussing some of the many murders that they have helped to solve.  I felt that the gruesome details of the cases were kept to a minimum and only included when necessary.

William Fleisher is an expert polygraph examiner, interrogator, and former FBI agent.  Richard Walter is a forensic psychologist who is referred to as 'the living Sherlock Holmes'.  I was amazed at how Mr. Walter could look at a photo of a crime scene/victim and make a very accurate profile of the murderer.  Frank Bender is a forensic artist and psychic.  He seems to work miracles with building sculptured busts of murder victims.

This book is full of facts and descriptions, though these did not keep it from being a very readable book.  I felt as though I was being carefully ushered throughout this story.  Given just enough details of the various crimes, but not overwhelmed by them in any way.

I would highly recommend this book to anyone interested in justice, crime fiction, true crime.  Perhaps not for the squeamish.

If this type of book appeals to you, The Black Tower by Louis Bayard also delves into the life of Eugene Francois Vidocq.  My review of The Black Tower.

Sounds just like my type of read though I am a litle squeamish. It's the forensic side of this that I will hopefully find fascinating, thanks for the recommendation Heather, I'm away to add it to my wish list.