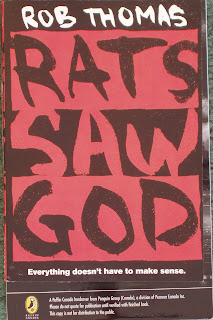 My son read this for his English class this term, so of course I told him that I'd read it as well.  He finished it and submitted his assignment weeks ago and I am only getting to my review now.

Steven York is a gifted student who is currently under-performing.  His dad is a re-known astronaut who divorced from his mother a few years ago.  Steve lives with his father in in Houston while his sister lives with his mother in Dan Diego.  Mid way through high school he moves to his mother's.

Having been caught for 'drugs' by his guidance teacher, he is given the option of making up his missing English grades by writing a 100 typed page essay on a topic of his choice.  Being a teen, Steve rebels at first, but then he decides to give it a try.

This assignment gives Steve the chance to re-examine the events of the past few years that have led him to his current situation.  Why he has such a rocky relationship with his father, why he thinks his dad walked out on his mom, why he rebels at so many situations.

I found this book an accurate look at teenagers.  Not all kids are the model academics, nor the aspiring jock.  There are those that either don't fit those moulds or those who purposely break out of them.  It doesn't make them bad, just different.  A couple of the teachers depicted in the book even found those kids more interesting than the 'perfect' ones.    These were the kids that joined the campus club: GOD (Grace or of Dadaists).  Now I'm not really sure what dadaist art is, but I realize that it's not following all those strict art rules of painting composition that came before that period.  Doing your own thing.  That is definitely what Steve was trying to do.  I think he was trying too hard not to be who he thought his dad was.

My son wasn't too thrilled with the book and he said he didn't see any kids he knew depicted in the book.  I had to chuckle at that.  There is a lot of my son right in Steve.  When I said that to my son, he told me I was wrong.

I'll keep this book around in the event that my daughter has to read it when she gets to that grade level.

Sounds like an interesting book that can be enjoyed on many levels and by many ages, thanks for recommending it.

HI Petty Witter, i did find this enjoyable and do think that it's readable for many ages not just teens. I suspect that adults reading it will find themselves or their friends in the various characters described in the book.

The book's title is certainly interesting! It makes me want to crack the book opennot even knowing what the book is about...