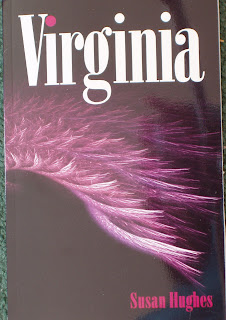 Ivy Morell is fourteen and has just started highschool.  Her elder sister, Katie, left home as she could no longer deal with their alcoholic mother and distant father.  Now she is trying to adjust to a new school as well as all those other 'issues' that confront teens.  One day, seemingly out of the blue her neighbour, Virginai Donato calls and says she wants to talk.

Virginia is the youngest of six siblings in a deeply religious family.  What could she possibly have to say to Ivy, whom she hasn't really been friends with in years.  She confides to Ivy that she has been visited by an angel and that she wants Ivy to be a witness to what has been asked of her.

My first reaction was that this was going to be a book about religion.  I kept reading and found that while Virginia and her family are religious that is only part of the story.  The bigger issue is what to do when you have given your word to a friend, and then you realize that you are going to have to break that promise.  Who do you tell and how much do you tell.  Ivy took her promise to her friend very seriously and did intend to keep  it even if she questioned whether it was true or all in Ivy's imagination, but she knew that Virginia needed help.

I thought that the way Ivy approached this dilemia was quite in keeping with a fourteen year old.  As an adult I would have done differently, but then again, Ivy doesn't have years and decades of experience.  I suspect that most teens find themselves in this type of situation time and again and they don't know where to turn.

Author Susan Hughes has written and published over 20  young adult and childrens books.

Thanks to Kids Can Press for this review copy.
Posted by Heather at 14:22

Um sounds very interesting, I think I'd like to read this one.

A little birdie tells me that your annual holiday read is A Christmas Carol. I've just read and reviewed this and must say I found it pretty hard going at times - the language had me at a complete loss in places, thank goodness I know the story so well.