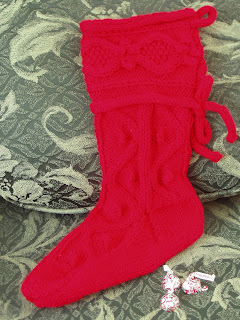 Yippee, my secretly knit stocking is finished and it's still a mystery.  My niece does know I have been making one for her, but she doesn't know what it looks like or the techniques used.  That's the surprise.  I have decided that it's going to remain hidden until Christmas morning, when Santa will stuff it and leave it on the floor in her room.

The pattern is from McCall's Needlework December 1993.  I used two balls of Patons Classic Wool,  colour 00230.  At some point a bug/moth or some such beastie got at the wool and ate and secreted something on it and broke all kinds of strands.  I have seen this once before on something my sister was knitting.  Weird as I had only bought the wool a week earlier.

It's kind of hard to see the pattern, but its a cable with seed stitch in the middle (top edge) and then bobbles in clusters of 4 in the top band and in the curves on the body of the sock.

Still working on two afghans for the holidays.  One will definitely be finished, the other will become a birthday gift in February.  Oh well, timing was never at the top of my skill list.
Posted by Heather at 13:27

Heather that is so pretty. I am sure she will love it.

This is so beautiful. Your is so lucky.

What a lovely surprise! Love the cables and bobbles.

Wow! Nice gift! I love the pattern of this stocking and you did a lovely job.

Beautiful! I love the cables.

Wow, that is lovely. I'm always awed by knitting talent having none myself. Your niece will be very excited when she sees it and will have a special Christmas memory from her wonderful aunt.