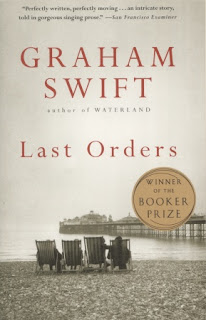 Jack Dodds passed away shortly after closing his family butcher shop.  Today is the day appointed for dispersing his ashes, and his son and friends have gathered.  If they had awaken this morning thinking that it would be an easy task, just open the jar and pour, then they were mistaken.

While his son Vince, and his friends Ray, Lenny and Vic are on their way to the seaside, his wife Amy is visiting their daughter June to break the news to her.

This day, meant to honour Jack, turns out to be one of deep reflection and soul searching for each of the people involved.  Over the years their lives had become so entwined that a simple good-bye wasn't enough.  it had to be more, much more.

At first I was a bit confused of who all these people were, but as I continued listening it became clear.  They were clearly grieving, not only for Jack's death, but also for events past and for events that could have been.

I particularly liked Ray's story.  During the course of the War, he and Jack has saved each others lives and become like brothers.  That bond had never been broken even if they didn't wear it on their sleeves every day.

This audio book features a full cast of characters/voices.  I found that this really enhanced the story telling.


Thanks to Random House Canada for the cover photo.

This is my 21 book for the Read, Remember, Recommend challenge hosted by Bibliobabe.  Visit her site for a list of books and their reviews by all participants.
Posted by Heather at 11:26

Great review, this sounds fantastic. I think I'll add it to my audio list. Interesting they used a full cast, more like a radio play.

I wonder if it was a bit confusing because it is from Highbridge. Their audios are abridged versions of books, I believe. And it seems to me that no matter how well done an abridgement is, it isn't quite the 'real thing.' There is a wonderful movie version of this book with an all-star cast.

Hi Nan. I did go and double check after reading your comment, and it was not abridged. I much prefer to read a book exactly as the author wrote it, though occasionally I slip up and down load and abridged audio. oops. I will be looking out for a copy of the movie. Unfortunately my library doesn't have one.