The Little Giant of Aberdeen County by Tiffany Baker 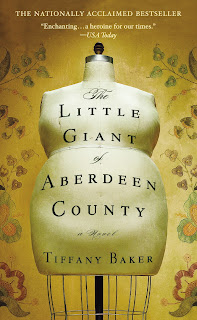 Truly Plaice was the largest baby ever born in Aberdeen County.  In fact she was so large that her mother died birthing her.  Throughout her infancy and childhood and into adulthood, she continued to grow.  The town doctor, Robert Morgan, had no answer for why Truly continued to grow, though he assured her and her father that she was healthy.

Truly was not the only unusually resident of the county.  For many generations past, the rural doctor had been named Robert Morgan, a descendant of the first Robert Morgan who arrived at the close of the American Civil War.  The first doctor's wife, Judith Dyerson, was rumoured to have been a witch who had left behind her 'shadow book', a book of spells and potions.

These two people were drawn together by Truly's elder sister Serena, the total opposite of Truly.  She was skinny, fashionable and popular.

The first paragraph of this book gave me the promise of an exciting read:


The day I laid Robert Morgan to rest was remarkable for two reasons.  First, even though it was August, the sky overhead was as rough and cold as a January lake; and second, it was the day I started to shrink.

This book was hard to put down.  I was intrigued by this growing giant and how gentle she was.  She adored by older sister and just wanted to be like her.  Yet the people in town just couldn't accept her.  Within a few short pages I was rooting for Truly.

As the story continued I became distracted by the quilt made by Judith Dyerson.  being a quilter myself, I wanted details, colours, stitches.  These details were slowly doled out as the story continued.  It sounds like the finest example of an embroidered quilt.  The flowers almost came to life for me as I read Truly's description.  The intricate details of the hand quilting had me breathless.  I don't know that I would be so daring with my hand quilting.

It is not often that a quilt plays the role of a main character in a novel, but this is the exception.  This story would not have been the same had the flowers been painted, or drawn.  At the time this story was set, the quilt would easily have been dismissed as un-important by any man in the house; it would have only be viewed as 'woman's work, nothing special'.  In this instance, that was a good and possibly intended outcome.  As the story unfolds, the true impact of the quilt becomes known and Judith's skill and cunning appreciated.

Author Tiffany Baker is working on her next novel, though I couldn't find any hint as to the topic.  I eagerly look forward to it's release.

I did a bit of a search, but couldn't find that any quilters have put together a pattern for this quilt.  There are sufficient details within the story that one could be drawn and stitched.  White silk for the background of the embroidery and black satin, or perhaps velvet for the inner boarder....

Thanks to Bostick Communications for my review copy.

For a contrast and very different review, click to see what was written over at Hey, I want to read that.

Visit Bookcrossing.com and see whose reading this book and where it had been released.

They have made a very funny cover for what seems to be an intriguing book.

I just loved this one and I loved your review, especially as a quilter. I'm so excited to hear she has another in the works. Here's a link to my review of the book: